TEHRAN, Jan 20 -US President Donald Trump has offered a deal to end the government shutdown, linking protection for undocumented immigrants to funding of a border wall, amid immediate rejection by Democratic lawmakers. 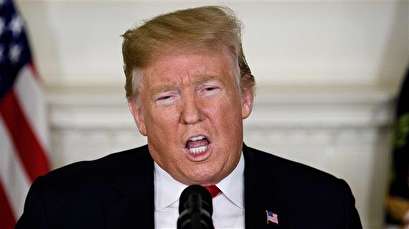 TEHRAN, Young Journalists Club (YJC) -Addressing the nation on Saturday in a televised speech from the White House, Trump outlined a plan that would extend temporary protections for young undocumented immigrants brought to the US as children -- known as Dreamers -- and individuals from some Central American and African nations, in exchange for $5.7 billion funding for a wall on the US-Mexico border.

“Both sides in Washington must simply come together, listen to each other, put down their armor, build trust, reach across the aisle and find solutions,” Trump proclaimed, but then insisted, “A wall is not immoral. The radical left can never control our borders. I will never let that happen.”

He further added, “As a candidate for president, I promised I would fix this crisis, and I intend to keep that promise one way or the other.”

According to local press reports, Trump’s deal would extend protections for Deferred Action for Childhood Arrivals (DACA) program recipients for three years and a three-year extension of protections for Temporary Protected Status (TPS) holders in exchange for the partial border wall funding.

Democrats, however, quickly rejected the deal, with Senate Minority Leader Charles Schumer of New York emphasizing  that Trump’s offering some protections for DACA and TPS recipients "in exchange for the wall is not a compromise but more hostage taking.”

Schumer further accused the US president of "putting forward one-sided and ineffective remedies,” adding, “There’s only way out: open up the government, Mr. President, and then Democrats and Republicans can have a civil discussion and come up with bipartisan solutions."

House Speaker Nancy Pelosi further described Trump’s proposal as a “non-starter” in a statement released shortly before his nationally-televised speech, insisting that the deal could not pass the House of Representative.

“Democrats were hopeful that the president was finally willing to re-open government and proceed with a much-need discussion to protect the border. ... It is unlikely that any one of these provisions alone would pass the House, and taken together, they are a non-starter,” Pelosi further said in her statement.

The development came as tensions are also running high between Trump and Pelosi after she asked him to postpone the annual State of the Union address, slated for January 29. Trump in turn prevented lawmakers from using military aircraft for congressional trips, including for Pelosi's planned visit to the war-torn Afghanistan this week.

This is while two congressional aides cited in local press reports also pointed out that Democratic leadership was not consulted on the forthcoming White House proposal, further noting that Democrats had previously rejected similar ideas.

"Similar inadequate offers from the Administration were already rejected by Democrats. The BRIDGE Act does not fully protect Dreamers and is not a permanent solution," said a senior House Democratic aide.

"This is not a compromise as it includes the same wasteful, ineffective $5.7 billion wall demand that shut down the government in the first place," the aide added.

Trump also underlined in his speech that he was making his pitch to “break the logjam” that has paralyzed Washington since late December, leaving roughly a quarter of the government closed and forcing roughly 800,000 federal employees be furloughed or work without pay.

The partial government shutdown, which marks the longest lapse in funding in modern US history, is currently in its 29th day as the stalemate over the funding of the border wall persists.

Meanwhile, several recent polls have shown that a majority of Americans blame Trump for the partial shutdown after the US president left a meeting earlier this month with Pelosi when the House speaker said she wouldn’t discuss border wall funding even if he reopened the government.

Seeking to make his case during his speech, Trump further seized on his belief that there is a “crisis” along the border requiring "urgent action."

“Illegal immigration reduces wages and strains public services. The lack of border control provides a gateway, a very wide and open gateway, for criminals and gang members to enter the United States," he claimed.