TEHRAN, Jan 20 - Sudanese security forces have fired tear gas canisters at hundreds of anti-government demonstrators to break up their rally, as protest against the country’s President Omar al-Bashir enters its second month. 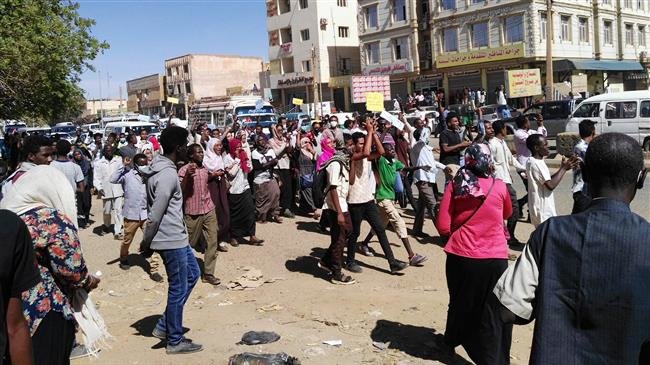 The peaceful rallies turned violent after hundreds of security personnel, some in uniform and some plainclothes, got off from some 30 all-terrain trucks and began firing tear gas canisters, stun grenades and live ammunition to disperse protests in both major cities.

According to witnesses, security forces also rounded up hundreds of opposition figures, activists and demonstrators.

Sunday's rallies come amid a string of strikes, already underway or planned for this week, by professional unions, including doctors, teachers, lawyers and pharmacists.

The African country has been jolted by near-daily protests since December 19, in the wake of a move by the government to triple the price of a loaf of bread, which angered people and triggered the demonstrations.

In the initial days of the rallies, several buildings and offices of Bashir's ruling National Congress Party were set alight by protesters. Riot police have so far managed to disperse the rallies, and security agents have arrested several opposition leaders and activists in a clampdown on suspected organizers.

The public display of anger, over price hikes and shortages, soon escalated into calls for Bashir, who took power in 1989 through a military coup, to step down, blaming him for the country’s problems.

Sudanese authorities have declared curfews and states of emergency in several states. Residents say police have used live ammunition in some cases to disperse the protesters.

The country has been struggling with a growing economic crisis over the past year led by a serious shortage of foreign currency. The cost of some commodities, including medicines, has more than doubled and a soaring inflation has hit 70 percent.

The increasing lack of food and fuel has been regularly reported across several cities, including the capital.

According to official figures, 26 people, including two security agents, have lost their lives since the onset of the rallies two months ago. However, some rights groups say at least 40 people have so far died.