TEHRAN, Jan 21 -Bangladesh has denied entry to dozens of Rohingya Muslims seeking to enter the country from neighboring India, leaving them stranded in the no man’s land on the border. 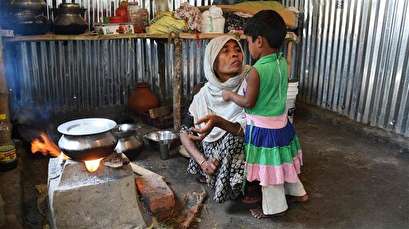 TEHRAN, Young Journalists Club (YJC) -The group, consisting of 31 women and children, has been stuck on the “zero line” of Bangladesh’s border with India since Friday, said Golam Kabir, the Border Guards Bangladesh (BGB) commander in the area.

“We stopped them as they were crossing the border,” Kabir told Reuters by telephone, adding that two rounds of talks with the Indian Border Security Force about their legal status had been inconclusive.

Since 2017, Myanmar’s military forces have intensified a heavy-handed crackdown on Rohingya Muslims – mostly based in the country’s Rakhine state -- with “genocidal intent,” according to the UN, in an operation that drove more than 700,000 of them into Bangladesh.

An Indian border force officer in Tripura state claimed on Sunday that they had provided food and clothing for the Rohingya refugees, 16 of whom were children.

The United Nations refugee agency (UNHCR) has expressed deep concern over India’s recent deportations of Rohingya refugees, who have been fleeing their homes in Myanmar’s Rakhine Sate over the past decades amid a heavy-handed military crackdown on the Muslim minority community there.

The UNHCR has registered identity cards for about 16,500 Rohingya refugees in India.

India, however, does not recognize the UNHCR cards.

The move will be Saudi Arabia’s second forced deportation of Rohigya refugees from the country this year, Al Jazeera TV reported.

The Rohingya Muslims, who have lived in Myanmar for generations, are denied citizenship and are branded illegal emigrants from Bangladesh, which likewise denies them citizenship.