TEHRAN, Jan 22 -The British Royal Air Force (RAF) is set to call back more than half of its fighter jets from Syria after US President Donald Trump’s decision to withdraw American forces from the Arab country. 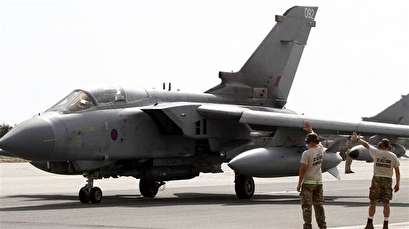 TEHRAN, Young Journalists Club (YJC) -British commanders confirmed on Monday that at least eight RAF Tornado jets would return to their bases in the UK next month, reducing to six the total number of British aircraft committed to the US-led aerial campaign in the country, the Daily Mail reported.

The decision comes after Trump’s announcement in December that US military forces were going to evacuate Syria as their mission to “defeat Daesh” had come to an end.

The US and Britain, alongside their other allies, have been pounding alleged Daesh positions in Syria since 2014.

Besides fighter jets, London has also deployed a number of its special forces to parts of Syria to carry out secret missions in coordination with over 2,000 American troops stationed in various bases across the war-torn country.

The ageing Tornados were scheduled to be retired in March but British officials shelved plans to replace them following Trump’s decision, the report said.

“Anything [the US] does in the operational theater affects us,” an unnamed RAF source told the Mail, confirming that the decision would have “undoubtedly” included air power.

The planned withdrawal leaves the UK with six advanced Eurofighter Typhoon jets and around 10 Reaper drones to carry out future operations.

The report said London would also reduce the number of its special forces in Syria in the coming weeks.

“The UK remains fully committed to the fight against Daesh [IS], and the retirement of the Tornado will be not lead to a reduction in the capability of the RAF’s contribution to the global coalition,” the Mail quoted a Ministry of Defense spokesman as saying.

It was revealed on Monday that at least a third of the UK Royal Air Force’s large fleet of fighter jets, including some Typhoons, were unable to fly.

Data made available under Freedom of Information (FOI) laws showed that 142 of RAF’s 434-aircraft fleet were either under repaired or mothballed – cannibalized for parts or stored for future use.

The jets unable to fly included 55 out of RAF’s entire fleet of 156 Typhoons, which the UK has used in its Syria operations.

They are the same jets that RAF uses to intercept Russian or other foreign jets that occasionally fly near British airspace.

Liberal Democrat spokesman Ming Campbell told The Mirror that the number were greater than what was expected for fleet of this size.

Nia Griffith, the shadow defense secretary, said: “Conservative cuts have had a crippling effect on this country’s defences and our ability to respond to the range of threats that the UK faces.”

The RAF has shrunk to half its size in the last 25 years.