TEHRAN, Jan 22 -At least one Palestinian has been killed and two others have been injured in Israeli shelling in the besieged Gaza Strip amid weeks-long anti-occupation demonstrations. 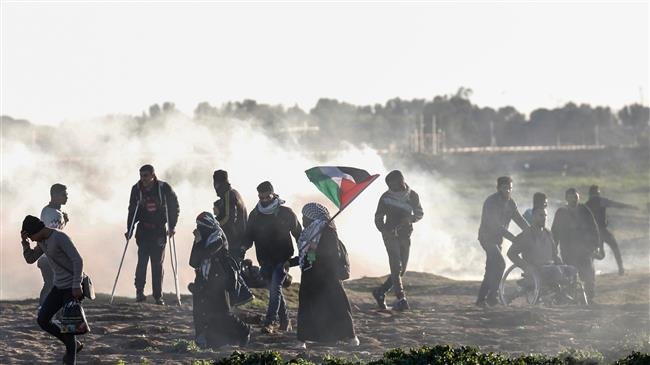 The Israeli military claims it targeted a post belonging to the Palestinian resistance movement Hamas after a group of Palestinians shot and injured an Israeli officer across the border with the occupied territories.

On Monday, the United Nations Office for the Coordination of Humanitarian Affairs (OCHA) said at least 254 Palestinians had been killed and over 23,000 injured by Israeli forces since the Great March of Return rallies began along the border on March 30, 2018.

Israel has also launched several wars on the Palestinian sliver, the last of which began in early July 2014 and ended in late August the same year. The Israeli military aggression killed nearly 2,200 Palestinians and injured over 11,100 others.

On Tuesday, the Lebanese army detained an agent of Israel's spy agency Mossad over a 2018 bomb attack on a Hamas official in the south of the country. It said in a statement that a second male suspect "who carried out surveillance" before last year's bombing had also been arrested.

In January last year, Mohammed Hamdan, a security official with the Lebanese branch of Hamas, was wounded in the leg in a car bomb blast in the southern Lebanese port city of Sidon. Following the January 14 blast, Beirut authorities said they had arrested a man suspected of involvement in the car bombing. A statement at the time said he was "one of the main perpetrators of the crime, who confessed to being tasked by Israeli intelligence."

In recent years, Lebanese security forces have busted several espionage cells in the country, whose members were collecting sensitive information and passing it to Mossad.