Man tried to ram gate of Presidential Palace in Warsaw

TEHRAN, Jan 22 -Security was seen heightened outside Warsaw's Presidential Palace on Tuesday, following an incident where a man attempted to ram the gates of the building. 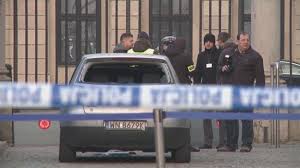 The 36-year-old driver reportedly hit one of the police officers with his car before hitting into a protective barrier in the driveway of the palace.

According to local media, the man was stopped by police for driving the wrong way in downtown Warsaw before the incident. The driver will reportedly be tested for drugs and alcohol.

President Andrzej Duda was reportedly not in the building at the time of the incident, as he left for the World Economic Forum (WEF) in Davos, Switzerland, on Monday.