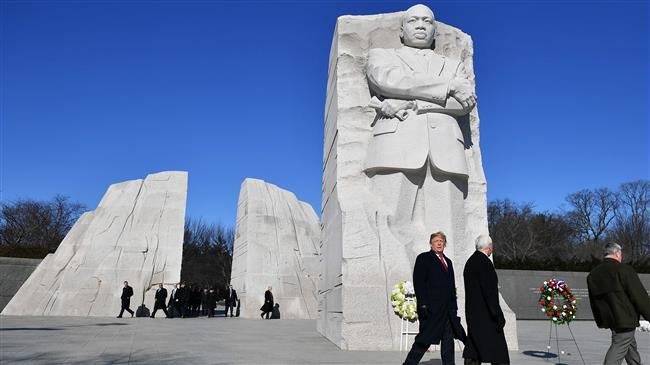 TEHRAN, Young Journalists Club (YJC)-Trump and Vice President Mike Pence were criticized on Monday for attempting to use the civil rights leader's 90th birthday anniversary to promote the administration’s agenda.

“What Trump and Pence did on Dr. Martin Luther King Jr. Day was a distortion his legacy,” said Abayomi Azikiwe, editor at the Pan-African News Wire.

Azikiwe insisted that if MLK was alive today he would be protesting against the Trump administration’s human rights violations and illegal detentions.

Hashemi, a 59-year-old African-American Muslim convert who has been living in Iran for years, was detained at St. Louis Lambert International Airport in Missouri last Sunday while she was in the US to visit her ill brother and other family members.

King, who was a clergyman, was assassinated on April 4, 1968 in Memphis, Tennessee.

He is best remembered for his role in the advancement of civil rights in the 1950s and 1960s.