TEHRAN, Jan 23 - Iranian journalists rallied outside the UN office in Tehran on Wednesday morning, to condemn the detention in Washington of Press TV journalist and news presenter Marzieh Hashemi. 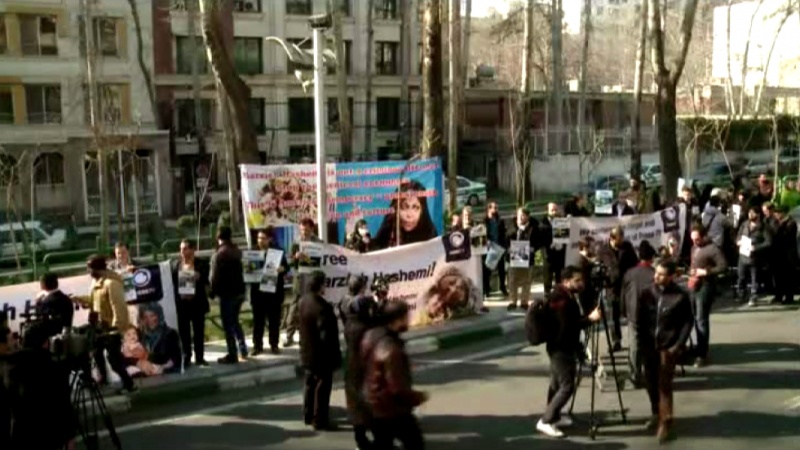 TEHRAN, Young Journalists Club (YJC) - Carrying 'Free Hashemi' placards and chanting 'Free Free Hashemi' and 'Down with the USA', the protesters urged the international community especially the United Nations as an international body to do something about innocent Press TV anchor Marzieh Hashemi, Iran Press reported.

Hashemi's arrest has been faced with so many reactions from different political and media figures and activists all around the world.

On January 20, Iran's Minister of Information and Communications Technology (ICT) Mohammad Azari Jahromi said that the US administration has once again trampled on its own principles by detaining Press TV’s anchorwoman.

On the same day, Iran's Majlis speaker said, that Marzieh Hashemi's unlawful detention signifies that the US is just bragging about Human right in the world.

Also on January 21, Iran's Vice Presidency for Women and Family Affairs in a statement on Sunday denounced the detention of Press TV news anchor, Marzieh Hashemi by FBI as a material witness.

On Saturday, the head of the IRIB World Service, Peyman Jebelli said Marzieh Hashemi, who was arrested in the US, is a symbol of the Islamic Revolution, and her detention in the US is a political move to pressure the Islamic Republic of Iran.

Pointing to Marzieh Hashemi's detention in the US, Jebelli added: "Mrs. Hashemi reinvigorated her life with the Islamic Revolution. She became a symbol of the Islamic revolution."

Hashemi, 59, was arrested on Jan. 13 by the Federal Bureau of Investigation at St. Louis Lambert International Airport while she was in the US to visit her ill brother and other family members.