TEHRAN, Jan 23 -President Hassan Rouhani says Iran, as a country rich in oil and gas resources, cannot be excluded from the global energy market despite US attempts to cut the country’s oil exports. 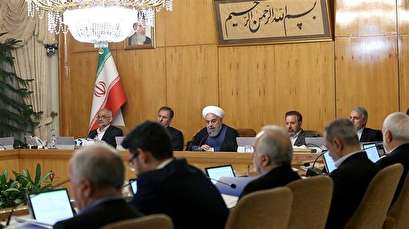 TEHRAN, Young Journalists Club (YJC) -Speaking at a cabinet meeting in Tehran on Wednesday, Rouhani said that Iran's discoveries of oil has almost doubled over the past 40 years.

“Today, the country possesses higher amounts of oil reserves and condensates compared to the early days of the [1979 Islamic] Revolution; this shows that we have made great achievements in discovering new resources,” he said.

“Given its capabilities in oil and gas [sectors], Iran is not a country that they could exclude from the energy market,” the chief executive said.

Under the administration of President Donald Trump, the US has stepped up its pressure campaign against Iran.

Trump’s hostile approach intensified last May, when he unilaterally withdrew America from the 2015 nuclear deal, known as the Joint Comprehensive Plan of Action (JCPOA), and unleashed the “toughest ever” sanctions against Iran.

Washington had initially vowed to cut Tehran’s oil exports to “zero,” putting pressure on customers to stop their purchase of Iranian oil. A few months ago, however, it gave waivers to almost all of Iran's major customers.

Rouhani added that Iran could be left out of neither the energy sector nor fields such as global and regional politics, science, technology and culture.

“Regarding oil issues, we have fortunately various methods to sell oil, and we will proudly circumvent the US sanctions,” he said.

"All countries know that these sanctions are oppressive and illegal and target the Iranian people as a whole - not any individual, institution or government body - and that they will only pile pressure on the nation,” he noted.

Iranian Parliament Speaker Ali Larijani echoed the president’s remarks on Wednesday, and stressed that the US has failed to prevent Iran from exporting its oil.

“The US sought to bring our oil exports to zero, but was unsuccessful,” he said. “At any rate, our oil is being sold, and we enjoy good economic relations with our neighbors.”