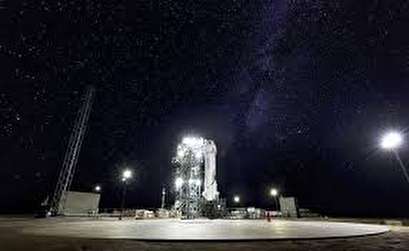 TEHRAN, Young Journalists Club (YJC) -Blue Origin was started by Amazon founder Jeff Bezos. The company's latest mission is part of NASA's Flight Opportunities program. It is meant as another test for the company's goal of future human flights, and carried several scientific payloads for NASA.

Wednesday's launch and flight was streamed on Blue Origin's website.

The flight lasted only a few minutes. Shortly after liftoff, Blue Origin confirmed the rocket and its payload were on their way back to Earth.

"Capsule has reached its apogee and is heading back home with its @NASA research and technology payloads," the company wrote on Twitter.

New Shepard had a flawless landing at the landing pad about eight minutes after liftoff, with the crew capsule touching down about three minutes later.

"The opportunity to re-fly our payload is helping us not only validate and compare data for different flight profiles, but also test modifications and upgrades," NASA's Kathryn Hurlbert, who heads up the Suborbital Flight Experiment Monitor-2 project at Johnson Space Center, told reporters. "In the very challenging task of flying things in space, it has been said -- and I continue to believe -- that 'you are done with testing when you can't think of anything else to test.'"

The experiments weren't released into space. Instead, they were subjected to a few minutes of weightlessness in suborbital space before being returned to Earth's surface by Blue Origin's reusable rocket.

One of the repeat experiments was designed by scientists at the University of Central Florida. The experiment will test the behavior of dust particles in space.

Another experiment, designed by scientists at Purdue University, "aims to help advance the use of a safer and more environmentally friendly rocket propellant by better understanding the fuel's behavior in microgravity."

Wednesday's flight was originally scheduled for last month, but was delayed for repairs to components of the launch pad infrastructure.

Though the latest New Shepard mission was coordinated by NASA, the ultimate aim of Bezos and Blue Origin is to carry civilians into space. Blue Origin, SpaceX and Virgin Galactic want to make space tourism a reality.