Qatar FM: No sign of breakthrough in Persian Gulf crisis

TEHRAN, Jan 24 - The Qatari foreign minister says there is no sign of breakthrough in the Persian Gulf diplomatic crisis, which has seen a Saudi-led quartet of states impose a blockade against Qatar. 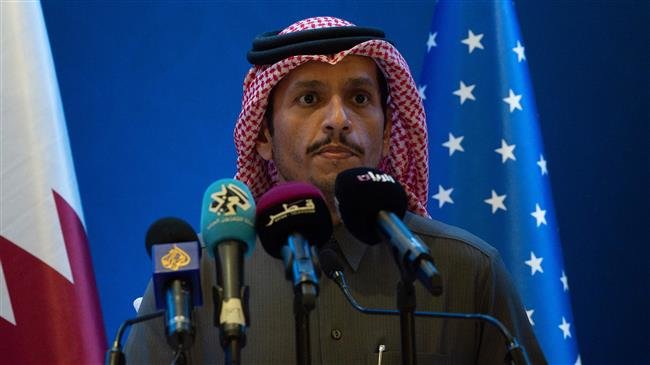 TEHRAN, Young Journalists Club (YJC) - Sheikh Mohammed bin Abdulrahman Al Thani said in an interview with Bloomberg that no steps have been taken towards the resolution of the diplomatic dispute since the latest summit of the [Persian] Gulf Cooperation Council (GCC) in Riyadh, Saudi Arabia, in December 2018.

His remarks to Bloomberg was published on Wednesday by the website of the Qatari Foreign Ministry.

Saudi Arabia, the United Arab Emirates, Bahrain, and non-member Egypt all cut off diplomatic ties with Qatar in June last year, after officially accusing it of “sponsoring terrorism,” which Doha has rejected.

Later that month, Saudi Arabia and its allies released a 13-point list of demands, including the closure of Al Jazeera television network, downgrade of relations with Iran and the closure of a Turkish military base in Qatar, in return for the normalization of diplomatic relations with Doha.

Qatar rejected those demands as an attack on the country’s sovereignty and interference in its domestic affairs and foreign policy agenda.

The minister further said Doha remains open to dialog over the dispute with the Saudi-led boycotters, but at the same time sticks to its own national agenda.

In the interview, the foreign minister was also asked if Qatar would consider closer relationships with Iran, Iraq and Turkey if the blockade persists.

He described Iran, Turkey and Iraq as “important parts of the region,” saying, “Qatar needs to have positive and constructive relations with those countries and this is not because of the blockade but it is a part of Qatar’s strategy to maintain its friendly relations with all countries in the region.”

“Iran is a part of our geography, and we hope also that the GCC (Persian Gulf Cooperation Council) countries start to engage with Iran in a positive and constructive dialogue to resolve this outstanding issue of our regional security which is impacting our security directly and indirectly,” he added.

Iran has taken a neutral stance in the dispute but has on humanitarian grounds sent food supplies to Qatar amid the Saudi-led siege of the country. It has also allowed Qatar’s national carrier to use its airspace.

Tehran has repeatedly called for negotiations between Qatar and the Saudi-led quartet in an effort to find a peaceful solution out of the row.

Al Thani, who is also Qatars’s deputy prime minister, further praised Iran’s stance on the crisis and Tehran’s contribution to alleviate the Persian Gulf state’s economic impacts, and particularly by opening its airspace to Qatari flights.

“Iran is a neighboring country at the end of the day, and Qatar shares gas fields with it,” he said.

The Qatari official further expressed hope that the GCC countries, especially the blockading countries, “go back to reason, start to engage with their region and resolve this issue.”