TEHRAN, Jan 24 - The leader of Yemen’s Houthi Ansarullah movement says his country is determined to stand up to oppressive measures of Saudi Arabia and its regional allies, which are involved in an atrocious military campaign against the impoverished Arab country. 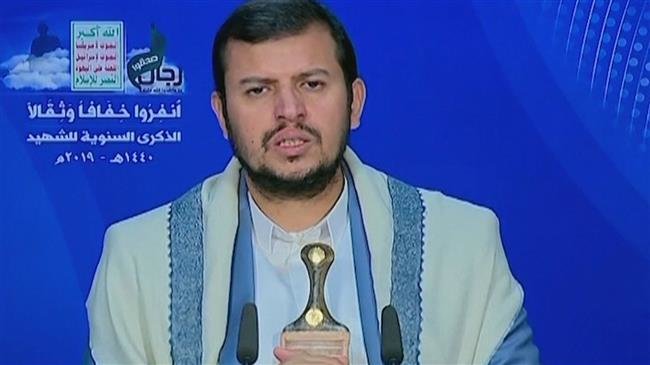 TEHRAN, Young Journalists Club (YJC) -Addressing his supporters via a televised speech broadcast live from the Yemeni capital Sana’a on Thursday evening, Abdul-Malik al-Houthi said, "The honorable people of Yemen have decided to stand against oppression," calling upon Yemenis from all social strata to remain resilient in the face of existing challenges.

“We will continue our steadfastness until the aggression against us ceases. The enemy is doing its utmost because it is extremely frustrated after failure to occupy our country. Our armed forces have built great military capabilities at all levels -- land, sea and air," he said.

“The enemy launched an economic war against us in a bid to exert the maxim level of pressure. It, however, could not break the will of our people,” Houthi said, adding, “The enemy seeks to use all methods to weaken the will of our nation in the face of its aggression.”

He highlighted that those who chose to pledge loyalty to the Saudi-led military alliance stood with oppressors against the oppressed Yemeni nation.

"Such people are standing on the wrong side and against righteousness. They must give an account on the Day of Judgment for their deeds," Houthi concluded.

He added that “hypocrites and those who committed profoundly evil deeds” followed the schemes drawn up by arrogant powers.

Houthi then warned that “wicked forces” in the Muslim world were hell-bent on distancing people from their moral values.

“Takfiris will pay the price for their wrong choices both in this world and the hereafter. Believers in God have always been drawn against forces of the evil throughout history,” the Ansarullah chief pointed out.

Saudi Arabia and a number of its regional allies launched a devastating military campaign against Yemen in March 2015, with the aim of bringing the government of former president Abd Rabbuh Mansur Hadi back to power and crushing Ansarullah.