Thousands of Yemenis rally to honor 'martyrs' of Saudi war

TEHRAN, Jan 25 - Thousands of Yemenis have rallied on the streets of Yemen's northern city of Sa'ada to commemorate fallen soldiers on Martyrs' Day. 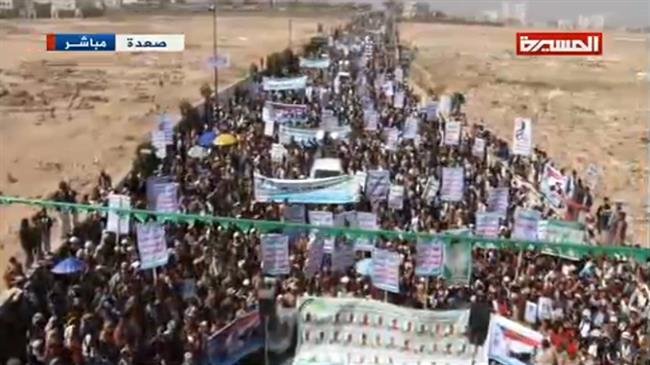 TEHRAN, Young Journalists Club (YJC) - The demonstrators stressed their willingness to counter what they described as foreign occupation and American policies in the region, Yemen's al-Massirah TV channel reported on Friday.

Protesters chanted slogans such as "We shall remain loyal to our martyrs" and "We will not abandon our principals" as they marched while they condemned those who had "betrayed the nation".

The protesters also expressed their determination to resist sanctions, fight the Saudi-imposed aggression and raise awareness among the public to thwart the "enemy's schemes".

At the rally, Ansarullah movement leader Abdul-Malik Badreddin al-Houthi urged the Yemeni nation to continue resistance against the invaders.

He said “hypocrites and those who committed profoundly evil deeds” carry out schemes drawn up by arrogant powers.

“The enemy seeks to use all methods to weaken the will of our nation in the face of its aggression,” said al-Houthi.

The Saudi-led coalition has, however, violated the truce on many occasions. On Thursday, heavy clashes were reported in the city following a Saudi attack on the city.

Saudi Arabia and a number of its regional allies launched a devastating military campaign against Yemen in March 2015, with the aim of bringing a former government back to power and crushing the Houthi movement.

The Saudi-led war has also taken a heavy toll on the country’s infrastructure, destroying hospitals, schools, and factories.

The UN has already said that a record 22.2 million Yemenis are in dire need of food, including 8.4 million threatened by severe hunger. According to the world body, Yemen is suffering from the most severe famine in more than 100 years.