TEHRAN, Jan 25 -Massive rallies have been held in many cities around the world to protest against the US legal system, in the wake of the 10-day imprisonment of Press TV anchor Marzieh Hashemi, who had traveled to the United States to visit her family. 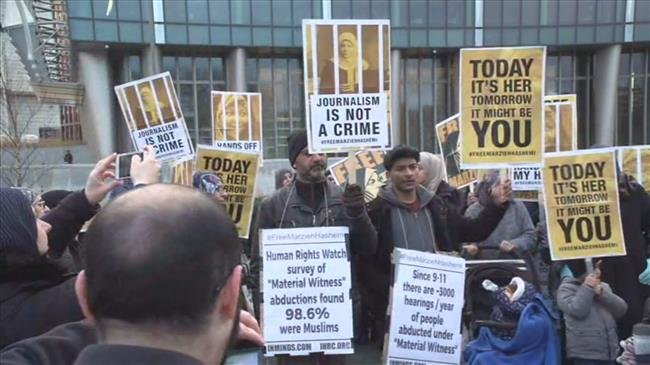 TEHRAN, Young Journalists Club (YJC) - In the Australian city of Melbourne on Friday, protesters condemned the illegal detention of the Press TV journalist by the Federal Bureau of Investigation (FBI).

They also slammed US authorities for forcibly removing Hashemi's Hijab (the head covering for Muslim women) in custody.

People also gathered outside the US embassy in London, the United Kingdom, to express their anger at the US legal system.

The protesters chanted slogans in support of Hashemi and carried placards that read, "Journalism is not a crime."

Speaking to Press TV, Ahmed Haneef, an Islamic cleric, said, "I think Marzieh Hashemi is a symbol. [She is] a symbol of the dangerous situation Muslims are in or non-Muslims are in not only in the United States but in many countries of the world where we have been victims of Islamophobia."

Pakistanis also held similar rallies in the city of Karachi. They voiced solidarity with the Press TV anchorwoman.

Hashemi, a 59-year-old Muslim convert who has lived in Iran for years, was detained at St. Louis Lambert International Airport in Missouri on January 13 while in the US to visit her ailing brother and other family members.

She was taken to court after spending a night in the facility’s “unbelievable conditions,” where she was incarcerated in solitary confinement next to other people from different nationalities that the FBI had detained for unknown reasons. She was initially forced to remove her hijab and only offered non-halal food.

The US government said Hashemi had been arrested as a “material witness” in an unspecified criminal proceeding and that she faced no charges herself.

To get to the courtroom, the Press TV journalist was forced to climb the stairs while in shackles because of the malfunctioning elevators that authorities had been unable to repair due to the ongoing government shutdown.

Hashemi was ultimately released without charge on January 23 after spending 10 days in prison and undergoing three grand jury hearings.

During a live interview with Press TV from Washington on Thursday evening, Hashemi spoke about her experience and how she is resolved to prevent others from being subjected to such mistreatment by the American justice system.

She said she had been "harassed" by American security officers during her previous trips to her homeland, but her detention took everything to a “whole new level.”

“In general, when I travel throughout the United States … I always have to be at the airports three to three-and-a-half hours prior to flight just to make it through all obstacles,” she said.

Hashemi is now in Washington, DC, to attend a march there.