TEHRAN, Jan 26 -Boeing delivered the first two next-generation KC-46 tanker planes to the U.S. Air Force, before the planes took off Friday to their first operating base. 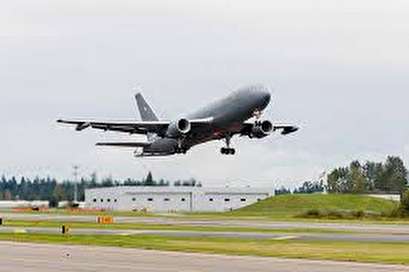 The aircraft left for McConnell Air Force Base in Kansas on Friday morning.

"Our airmen are excited about flying the KC-46, and our mobility enterprise is ready," Air Mobility Command chief Gen. Maryanne Miller said at the ceremony. "Today we are adding another arrow in our quiver of mobility. We're excited, we can't wait to get this airplane to McConnell and we can't wait to get after it."

The handover on Thursday came eight years after Boeing was awarded a contract to build the plane, and about two weeks after the first delivery of a KC-46 plane. Boeing's goal is to deliver 36 of the aircraft in 2019, and about a dozen more are nearing completion, said Mike Gibbons, Boeing vice president.

The Air Force is accepting the aircraft despite known problems with the boom operator's remote vision system. Boeing is paying to solve the issues, which are responsible for withholding of up to $26 million per plane until the deficiencies are corrected.

Under certain circumstances, the boom operator's view of refueling could be impaired if sunlight strikes a camera at a certain angle. In tests, boom operators occasionally were unaware if the boom, which pumps fuel to another plane while both are airborne, was scraping a receiving aircraft.