Treasury: US stepping up economic measures to drive Maduro from power

TEHRAN, Jan 26 -The Trump administration says the US will step up economic measures against Venezuela in a bid to drive President Nicolas Maduro from power a day after Caracas severed diplomatic ties with Washington. 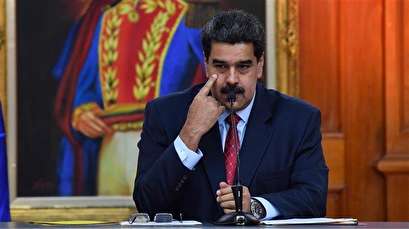 TEHRAN, Young Journalists Club (YJC) -The Treasury Department issued a statement Friday, saying the US will use "its economic and diplomatic tools" to ensure that any commercial sales by Venezuela are consistent with Washington's recognition of opposition leader Juan Guaido as Venezuela’s legitimate head of state.

"The United States will use its economic and diplomatic tools to ensure that commercial transactions by the Venezuelan government, including those involving its state-owned enterprises and international reserves, are consistent with this recognition," said the statement.

The department, however, did not say there will be any freeze on Venezuela’s US assets and accounts.

Maduro has censured US President Donald Trump for seeking to orchestrate a coup against his government and backing the self-declared leader.

"I believe there’s no doubt that Donald Trump wants to impose a de facto government, unconstitutional government, a coup against the people and democracy in Venezuela."

Trump recognized Guaido as the “legitimate” interim president of Venezuela, calling on other governments in the Western Hemisphere to also recognize his so-called presidency.

US Secretary of State Mike Pompeo is expected to urge members of the United Nations Security Council to recognize Guaido on Saturday in a session Washington had requested earlier.

Pompeo will be accompanied by former US diplomat Elliott Abrams, who he tapped as the government’s point person to handle the escalating crisis in Venezuela.

Maduro said he welcomed the UN session, adding, “We’re going to tell the truth about the articles of the constitution, about the coup.”

At least 10 countries, including Russia, Turkey and Iran, have expressed their support for Maduro and condemned outside interference in Venezuela.

Observers say the strong support by the army as well as Russia and other countries have dealt a significant blow to US efforts to oust Maduro, forcing the EU to backpedal on its “Maduro must go!” stance.