TEHRAN, Jan 26 -Russia says it will help Cuba overhaul its flag carrier, Cubana de Aviacion, which is hardly hit by persisting US economic sanctions against the Caribbean island country. 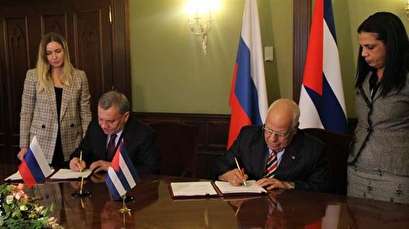 TEHRAN, Young Journalists Club (YJC) -“Everything has passed to the practical stage and I consider that the Cuban fleet will be re-established in 2019,” said Russia’s Deputy Prime Minister Yuri Borisov after a Friday meeting in Havana with Cuba’s Vice President Ricardo Cabrisas, according to Cuban news agency Presna Latina.

“We agreed in the future to work on creating a services center in Cuba dedicated to the aviation fleet in order to avoid a repetition of a negative situation,” he added.

Cubana had to cancel most domestic flights last year due to a lack of flight-worthy aircraft and relying on passenger planes hired on lease from other airliners, the report said.

One of the aircraft Cubana leased, a 39-year-old Boeing 737, crashed last May killing all but one of the 113 onboard. The probe into to the deadly incident is still underway.

The Cuban carrier uses mostly Russian and Ukrainian-made Ilyushins, Tupolevs and Antonovs mainly because the brutal US-imposed sanctions prevent the impoverished country from procuring planes with a certain share of US-built components.

The development came after Russian and Cuban officials held talks in Moscow as part of a high-level intergovernmental commission meeting, during which, according to Borisov, both sides had checked the repairs needed and had written contracts. However, he did not elaborate on other details, including possible costs.

State-owned Russian Railways (RZD) announced back in 2017 that it was in talks to upgrade more than 1,000 kilometers of Cuban railroads and install a high-speed link between Havana and the resort city of Varadero, in what would be Cuba’s largest infrastructure project in decades.

Press reports at the time estimated the cost of the deal at about two billion euros, adding that it would be signed by the end of the year. Since then, however, completion of the project has not been announced.

“We agreed to divide it into stages and optimize the necessary credits in order to carry out this project,” Borisov was cited as saying on Friday, adding: “I expect it to be put into practice in a near future.”

Cuban President Miguel Diaz-Canel made his first state visit to Russia back in November for high-level talks with President Vladimir Putin and other senior Russian officials in wake of new US sanctions against the country despite reestablishment of ties between the old foes during the administration of former US President Barack Obama.

According to the Kremlin, the two leaders discussed "the state and prospects of the further consolidation of Russian-Cuban strategic partnership in various spheres and discuss opinions on current international and regional problems."

Prior to the visit by Diaz-Canel, Russian officials had signed a $260 million contract to modernize Cuban energy facilities and a metal factory. The two leaders reportedly also discussed expansion of their military ties.

Putin visited Cuba in 2000 and 2014, seeking to revive faltering ties between the two nations following the collapse of the Soviet Union in 1991 and the ensuing economic hardships.