TEHRAN, Jan 26 -More than a dozen civilians have lost their lives when the US-led coalition purportedly fighting the Daesh Takfiri terrorist group carried out an operation in Syria's troubled eastern province of Dayr al-Zawr. 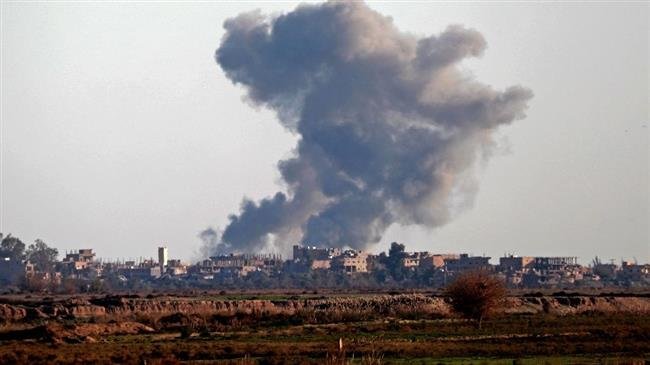 The London-based monitor added that there were seven children among the fallen civilians.

The group noted that the death toll was expected to rise as some of the wounded victims were in a critical condition.

The US-led coalition has been conducting airstrikes and operations against what are said to be Daesh targets inside Syria since September 2014 without any authorization from the Damascus government or a UN mandate.

Syria has on numerous occasions condemned airstrikes by the US-led coalition, asking the UN to force Washington and its allies to put an end to their military intervention in the Arab country.

The Syrian Ministry of Foreign Affairs and Expatriates, in two separate letters addressed to UN Secretary General Antonio Guterres and the rotating president of the Security Council, Francisco Antonio Cortorreal, on January 19, censured last week’s US-led coalition strikes against al-Baghuz al-Tahtani village in Dayr al-Zawr province, saying the US-led warplanes had targeted dozens of families, who were fleeing from areas controlled by Daesh.

“This new crime is in line with the criminal acts that the US-led coalition is perpetrating systematically and on a daily basis against Syrian people, and in flagrant violation of Syria’s sovereignty and territorial integrity,” said the letters.

“The activities of this alliance are illegal as it has been formed outside the UN framework. Such acts have only contributed to the expansion of extremist terrorist organizations, especially Daesh. Cooperation and coordination between these terrorist groups and this alliance has been documented in numerous letters that [the] Syrian Arab Republic has sent to the Security Council,” added the letters.

The ministry also condemned in the strongest terms the US-led coalition’s continued attacks against the conflict-plagued country’s critical infrastructure, energy facilities and public and private property.

It also called on the UN Security Council to shoulder its responsibilities as regards to the establishment of international peace and security, and put an immediate halt to crimes against humanity that were being carried out by this “rogue” coalition against Syrian civilians and infrastructure.

The Syrian Foreign Ministry demanded that the Council take necessary measures to set an international mechanism to punish the perpetrators of such crimes.