TEHRAN, Jan 27-The normally sleepy Brazilian town of Brumadinho is reeling after a dam collapse killed at least 34 and left hundreds missing. 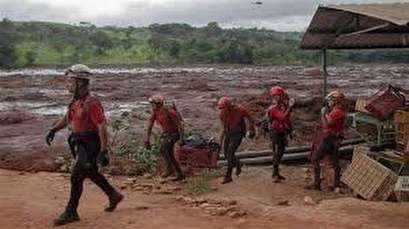 TEHRAN, Young Journalists Club (YJC) -Teams of rescuers have converged on the town to dig through thick mud in the search for survivors.

Firefighters focused their hopes on a bus, a train, mining offices and nearby homes that were buried on Friday (January 25) when a torrent of mud was unleashed by the dam break at Vale's Corrego do Feijao facility in Minas Gerais state.

A Brazilian judge in the state of Minas Gerais on Saturday froze 5 billion reais ($1.33 billion) in the accounts of miner Vale SA to pay for damages caused by a dam burst, prosecutors said.