TEHRAN, Jan 27 - Venezuela defused a potential showdown with the United States, suspending a demand that U.S. diplomats leave the country as Washington called on the world to "pick a side" in the South American nation's fast-moving crisis. 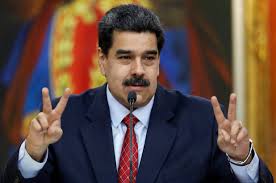 TEHRAN, Young Journalists Club (YJC) - Socialist President Nicolas Maduro broke relations with the United States on Wednesday after the Trump administration and many other nations in the region recognized opposition leader Juan Guaido as Venezuela's interim president, a move that Maduro called a coup attempt.

Maduro gave U.S. diplomats three days to leave the country, but the Trump administration said it wouldn't obey, arguing that Maduro is no longer Venezuela's legitimate president. That set the stage for a showdown at the hilltop U.S. Embassy compound Saturday night, when the deadline was to expire.

But as the sun set on Venezuela's capital, the Foreign Ministry issued a statement saying Maduro's government was suspending the expulsion to provide a 30-day window for negotiating with U.S. officials about setting up a "U.S. interests office" in Venezuela and a similar Venezuelan office in the United States. The U.S. and Cuba had a similar arrangement for decades before the Obama administration restored diplomatic relations with the communist-run island.

The State Department did not confirm the Venezuelan government's account, reiterating only that its priority remains the safety of its personnel and that it has no plans to close the embassy.

Earlier Saturday, Secretary of State Mike Pompeo told the U.N. Security Council: "Let me be 100 percent clear — President Trump and I fully expect that our diplomats will continue to receive protections provided under the Vienna Convention. Do not test the United States on our resolve to protect our people."

In the Security Council meeting, critics and supporters of Maduro's government faced off in a reflection of the world's deep divisions over Venezuela, which is mired in political confrontation as well as an economic collapse that has caused millions to flee the country.

During the debate, which was requested by the U.S., Pompeo urged all nations to end Venezuela's "nightmare" and support Guaido.