TEHRAN, Jan 27 -Anti-government protesters in Sudan have flocked to the streets of the capital, Khartoum, and its twin city of Omdurman to hold sit-ins and rallies, as hundreds of riot police attempted to break up the crowds and disrupt the rallies. 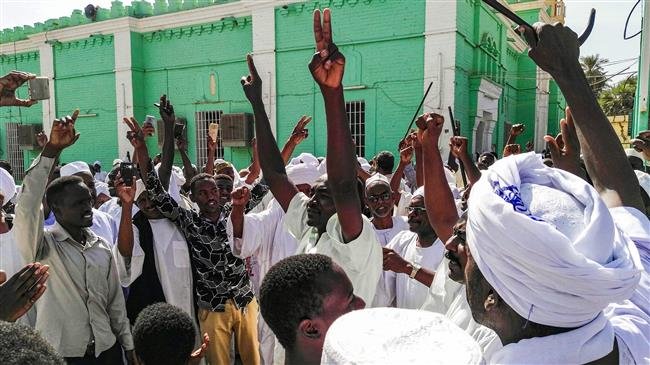 TEHRAN, Young Journalists Club (YJC) - Hundreds of demonstrators held rallies in their neighborhoods and some squares in both cities on Sunday, the latest in a string of demonstrations since December 17 last year against Sudanese President Omar al-Bashir over price hikes and shortages in the East African nation, calling on him to step down.

The Sunday rallies, as those held previously, were called and organized by the Sudanese Professionals’ Association (SPA), an umbrella group of unions representing doctors, teachers, and engineers.

According to witnesses, the massive deployment of riot police and security agents prevented protesters from convening at several of the designated locations.

As they marched, the demonstrators shouted, “The people want the downfall of the regime,” a signature slogan of the “Arab Spring,” the series of uprisings and revolutions that erupted in Arab countries back in 2011.

“You’re police, you have to protect us,” shouted the protesters as police cordoned off a number of squares in the capital and Omdurman — which is the country’s second largest city, where demonstrators had planned to gather for sit-ins. Police forces also filled some locations with muddy water to prevent demonstrators from gathering, witnesses said.

The country’s National Intelligence and Security Service (NISS) have reportedly been carrying out a crackdown on protesters, opposition leaders, activists, and reporters in an attempt to prevent the spread of the rallies.

Meanwhile, President Bashir, who is in Egypt on an official visit to meet with his Egyptian counterpart, Abdel Fattah al-Sisi, continues to reject calls for his resignation.

He has said the demonstrations are “an attempt to clone the so-called Arab Spring in Sudan.”

“There is a problem [in Sudan]. We are not claiming that there is not. But it’s not of the size or extent raised in some media,” he has said.

Official figures say that at least 30 people, including a number of security agents, have lost their lives since the onset of the rallies. Some rights groups say at least 40 people have been killed.

The rallies first erupted in the farming town of Atbara in the wake of a move by the government to triple the price of one loaf of bread, which angered people and triggered the initial demonstrations, which swiftly mushroomed into nationwide protests against Bashir.

The country has been struggling with a growing economic crisis, including a serious shortage of foreign currency. The cost of some commodities, including medicines, has more than doubled and inflation has hit 70 percent. A growing lack of food and fuel has also been regularly reported across several cities, including Khartoum.

Bashir took power through a military coup in 1989.