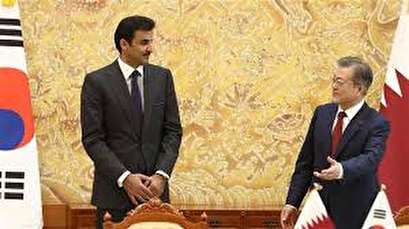 The Qatari monarch attended the summit with Moon on Monday, during which the two leaders explored ways for increasing South Korea’s role in various fields in Qatar, including transportation, infrastructure and health care besides energy and construction sectors.

Moon stressed friendly relations between South Korea and Qatar and welcomed the idea of enhancing the volume of bilateral trade exchanges.

“The countries have much potential to enhance cooperation in various areas. I hope that your official visit can upgrade the two nations’ relationship and pave the way for expanding cooperation on the global stage,” he said.

Sheikh Tamim, in turn, hailed solid ties between Seoul and Doha, expressing hope that his visit can boost their friendship.

Following his talks in Seoul, the Qatari monarch is scheduled to head to Japan — his country’s top trading partner — and then to China.

He is expected to sign several “agreements” during his visits, the Qatar News Agency reported last week.

Sheikh Tamim’s Asia tour comes amid an all-out economic siege imposed on his country by a Saudi-led quartet of its neighbors and former allies.

In June 2017, Saudi Arabia, Egypt, Bahrain, and the UAE slapped import-dependent Qatar with a land, naval and air blockade, accusing Doha of supporting terrorism, an allegation strongly denied by Doha.

They presented Qatar with a list of demands and gave it an ultimatum to comply with them or face consequences. Doha, however, refused to meet the demands and stressed that it would not abandon its independent foreign policy.