TEHRAN, Jan 29 -US National Security Adviser John Bolton has been photographed holding confidential notes with information about a possible troop deployment in the South American country of Colombia, which reports say might be linked to ongoing unrest in neighboring Venezuela. 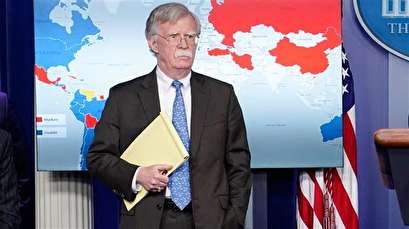 What caught reporters’ attention, however, was a yellow notepad that the hawkish US official was holding against jacket with its pages facing the cameras.

One of the pages photographed by curious journalists included two lines of writings: “Afghanistan -> Welcome the Talks,” which referred to ongoing negotiations between Washington and the Taliban militant group, and “5,000 troops to Colombia.”

Unnamed Pentagon officials told The Washington Post that the administration of President Donald Trump had yet to order any such deployment. They refused to discuss the matter further.

The mysterious line might provide clues into Washington’s secret plans to carry out military intervention in Venezuela, an option American officials have said is on the table along with other economic and diplomatic measures.

"I don't think any president of any party who is doing his or her job would be doing the job properly if they took anything off the table," Mick Mulvaney, Trump’s acting chief of staff, told Fox News on Sunday. "I think the president of the United States is looking at this extraordinarily closely."

A White House spokesman did not to quash speculation about upcoming US troop deployments to Colombia, Venezuela’s neighbor, simply reiterating Washington’s "all options are on the table" announcement.

South Carolina Republican Senator Lindsey Graham said recently Trump had brought up the idea of military action in Venezuela in a conversation they had earlier this month according to Axios news website.

"Well, you need to go slow on that, that could be problematic," Graham recalled telling Trump. Trump replied, "Well, I'm surprised! You want to invade everybody.'"

"And I said, 'I don't want to invade everybody, I only want to use the military when our national security interests are threatened,'" Graham added.

The Trump administration has already expressed support for Guaido, who served as the president of the national assembly of Venezuela before proclaiming himself “interim president” of the country.

Colombia unaware of US plans

Colombia shares a 1,370-mile (2,200-kilometer) border with Venezuela and has joined Washington in backing Guaido.

If true, the troop deployment to Colombia would mark a major escalation of US involvement in South America.  It is not clear what role US service members would take on in case of possible deployment.

Back in fall, the US Navy sent its hospital ship USNS Comfort to the Colombian port of Riohacha on a declared mission to treat Venezuelan migrants. The ship has since returned to its base.

American military forces have long collaborated with their Colombian counterparts, providing them with training on a range of missions from counter-militancy to securing aircraft crash scenes.