TEHRAN, Jan 29 - Ukraine's pro-Western President Petro Poroshenko launched his bid for a second five-year term in front of thousands of supporters on Tuesday, ahead of a tight election race in March. 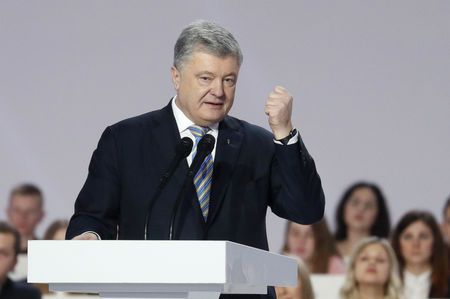 TEHRAN, Young Journalists Club (YJC) - A 53-year-old confectionary magnate and one of Ukraine's richest men, Poroshenko has steered the country on a pro-Western and pro-NATO course since coming to power in the aftermath of the 2014 Maidan protests and Russia's annexation of Crimea.

"The feeling of deep responsibility before the country, before contemporaries, before past and future generations prompted me to decide to run again for the presidency," Poroshenko said.

Among his policy priorities, Poroshenko said Ukraine would apply to join the European Union by 2024 and that a special court to try corruption cases would be up and running this year.

Poroshenko's popularity has dwindled over patchy efforts to tackle corruption and his failure to end the conflict in the eastern Donbass region that has killed more than 10,000 people.

He has also failed to raise living standards in one of Europe's poorest countries.

Poroshenko, however, may be a more predictable option for investors than his nearest challengers such as former Prime Minister Yulia Tymoshenko or Volodymyr Zelenskiy, a political novice who achieved fame as a comic actor.

Tymoshenko, the frontrunner, wants to cut gas prices for households, which may set her on a collision course with the International Monetary Fund and other foreign backers who pumped billions into Ukraine to keep its war-scarred economy afloat.