TEHRAN, Jan 29 - The British parliament is preparing to vote on seven crucial proposals or amendments that could decide the future of a process to leave the European Union after a divorce deal by Prime Minister Theresa May was roundly rejected in the chamber. 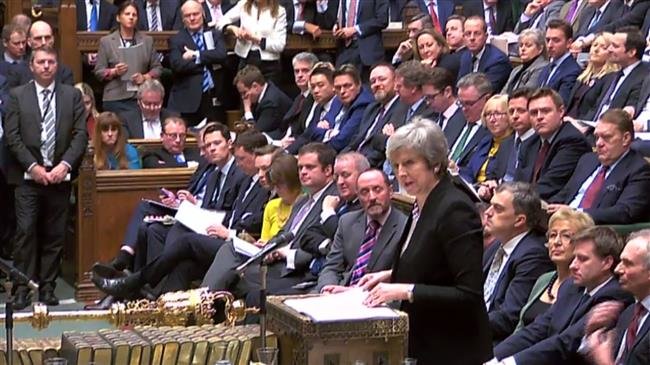 TEHRAN, Young Journalists Club (YJC) - The House of Commons started its debate on the amendments on Tuesday following a speech by May in which the premier urged the lawmakers to use the opportunity created by rejection of her deal in the parliament to show to the EU how Britain wants to shape Brexit.

“Today we have the chance to show the European Union what it will take to get a deal through this House of Commons, what it will take to move beyond the confusion and division and uncertainty that now hangs over us,” May told the parliament before the five-hour debate on the amendments started.

May said that the EU was now fully aware that a deal she signed with the bloc in November, which the Commons rejected by a historic majority of 230 votes on January 15, was not the way forward.

“I also accept that this House does not want the deal I put before it, in the form that it currently exists...Today we need to send an emphatic message about what we do want,” May said.

Britain is expected by the law to leave the EU on March 29. Lawmakers and the government came to the Commons with various amendments on Tuesday to avoid a disorderly Brexit which experts say could have serious economic impacts on Britain.

Among those amendments is one by May’s cabinet which seeks to ensure that the Commons would support replacing a controversial clause in the Brexit deal on the future of the Irish border with “alternative arrangements”.

Another key proposal, which is backed by the opposition Labour Party and put forward by Labour MP Yvette Cooper seeks to wrest control of the Brexit process from the government and assign the responsibility to the Commons.

Reports said the parliamentary vote on the amendments would start on 1900 GMT.