TEHRAN, Jan 31 - Russia has warned that members of the so-called White Helmets civil defense group are making preparations to film scenes of staged chemical attacks in Syria’s northwestern province of Idlib in a bid to implicate Syrian government forces and invent pretexts for possible acts of aggression on army troops. 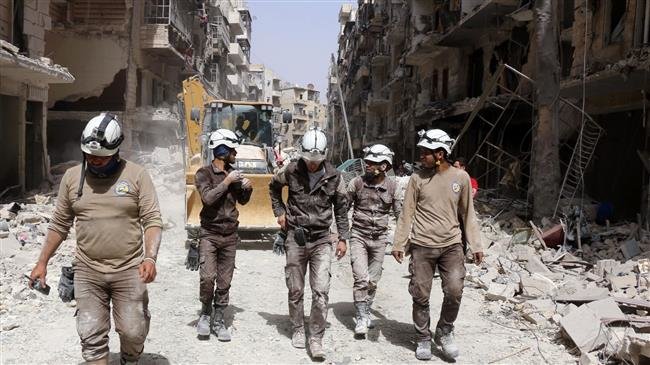 TEHRAN, Young Journalists Club (YJC) -Speaking during a press briefing in the Russian capital Moscow on Thursday, Russia’s Foreign Ministry spokeswoman, Maria Zakharova, said there were reports that the Western-backed group, which has been repeatedly accused of cooperating with Takfiri terrorists and staging false flag gas attacks, has installed cameras and related equipment in several hospitals across Idlib to film the purported victims of fake chemical attacks.

“Tensions around the Idlib de-escalation zone are not on the decline,” Zakharova pointed out, adding, “Hayat Tahrir al-Sham militants, who are running the show there, do not only shell nearby settlements on a daily basis, but are also actively beefing up their presence near the contact line with Syrian government forces.”

The diplomat also expressed deep concern over incoming reports that the terrorists “have not abandoned efforts to stage a chemical attack against civilians.”

Zakharova concluded that Moscow has urged Washington to withdraw its troops from Syria as soon as possible, calling for the return of all Syrian territories to the Damascus government's control.

The Russian Defense Ministry said on September 11, 2018 that foreign-sponsored terrorists had started filming scenes of a staged chemical attack in Idlib province.

The Russian Center for Syrian Reconciliation said in a statement that cameramen from several Middle Eastern television networks and an American news channel had arrived in the city of Jisr al-Shughur to produce the footage needed for the provocation.

The statement added that a Takfiri militant outfit had been provided with two canisters of a “chlorine-based chemical” for the purpose of the operation.

It further noted that the footage would include scenes of members of the so-called White Helmets aid group helping and treating the residents of Jisr al-Shughur after an alleged barrel bomb chemical weapon attack by the Syrian army.

“All the footage of the staged provocation is to be delivered to the newsrooms of TV channels, which are to broadcast it after its publication on social media,” the statement pointed out.

The United States has warned it would respond to any possible chemical weapons attack by Syrian government forces with retaliatory strikes, stressing that the attacks would be stronger than those conducted by American, British and French forces last year.

On April 14, 2018, the US, Britain and France carried out a string of airstrikes against Syria over a suspected chemical weapons attack on the city of Douma, located about 10 kilometers northeast of the capital Damascus.

Washington and its allies blamed Damascus for the Douma attack, an allegation rejected by the Syrian government.

On September 11 last year, Russian Deputy Foreign Minister Sergei Ryabkov censured the US threats to use military force against Syria as part of Washington’s blackmail policy.

“Unlike the United States, Britain and their allies, Russia provides particular facts on a daily basis through its Defense Ministry, the Foreign Ministry as well missions in New York, The Hague and Geneva. We particularly name geographical points, where preparations are underway for certain terrorist groups backed by the US and its allies to carry out provocations,” Ryabkov said.

Western governments and their allies have never stopped pointing the finger at Damascus whenever an apparent chemical attack takes place.

This is while Syria surrendered its stockpile of chemical weapons in 2014 to a joint mission led by the United States and the Organization for the Prohibition of Chemical Weapons (OPCW), which oversaw the destruction of the weaponry. It has also consistently denied using chemical weapons.