Tehran, YJC. Iranian official says Iran has imported worth 350 from and exported $200 million to the United States. 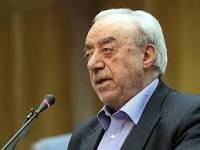 Asadollah Asqar Oladi speaking in a conference in Semnan on Tuesday pointed to Iran’s active diplomacy in fall last year where "we could make good progress in trade.”

"In the past 10 months of this year, the country’s export has amounted to about $33.8 billion. If we manage in the remaining two months to increase the volume by $7 billion, Iran’s export value of the year will reach $41 billion.

He added "Right now the exported goods are of high prices, which challenges the exporter’s competitive power at the target market. I hope that the Minister of Industry sets the export prices more logically to help bring about the competitiveness needed on the global stage.”

Asqar Oladi pointed out that Iran’s trade with the US has amounted to $550 billion in the past four months, of which "$350 billion has been imports and $200 billion export.”

He also mentioned that the Iranian pistachio of Damqan competes heavily with the American type, adding "Even members of the American Pistachio association take the Damqan product for their personal use.”

A few days ago an official had said that Iran lost the first place for exporting pistachio to CA, US.