TEHRAN, Feb 20 - President Hassan Rouhani says the tug of war that is currently underway between Iran and the United States is at its “maximum level,” but that the Islamic Republic will undoubtedly emerge victorious in “this battle of wills.” 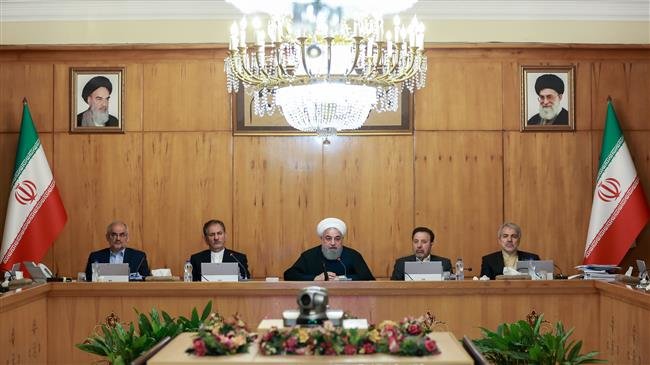 TEHRAN, Young Journalists Club (YJC) -  Speaking at a cabinet meeting in Tehran on Wednesday, Rouhani made mention of the consecutive failures suffered by the US in its anti-Iran schemes.

“Today, the tug of war between Iran and the US is at a maximum level, meaning that they (the Americans) have been doing their utmost against the Iranian nation; while Iran has been employing its maximum determination, hope and self-confidence vis-a-vis (the Americans),” he said.

“We have no doubts that the great Iranian nation’s resolve will eventually win against the US,” Rouhani noted.

The president further described the unity between the Iranian nation and the three branches of the government as the key to their triumph in the face of the US pressure campaign.

He also said that the US administration was dealt a blow last year, when the European states refused to follow its example in withdrawing from the nuclear agreement, officially named the Joint Comprehensive Plan of Action (JCPOA).

The US has unleashed the “toughest ever” sanctions against Iran following its pullout from the JCPOA. The White House has also warned its European allies against seeking to circumvent the anti-Iran bans.

However, France, Germany and Britain defied US threats and recently launched the Instrument in Support of Trade Exchange (INSTEX), a financial mechanism meant to protect Tehran-Europe trade ties against the sanctions.

The Iranian president noted, “We are ready for cooperation and interaction with the world, but the countries doing business with us must be careful not to pursue excessive demands, because the Iranian nation does not retreat from its principles and does not favor such demands when it comes to outstanding issues involving its national interests.”

Elsewhere in his remarks, Rouhani touched on a recent US-organized conference in Warsaw, Poland, saying the Americans were forced to make changes in the event’s anti-Iran agenda under pressure.

He also noted that Washington’s attempts to persuade other countries to oppose the JCPOA had led to “a humiliating political defeat” for America at the UN Security Council.

During the Warsaw meeting, the Americans were seeking two objectives, namely spreading Iranophobia and consigning the issue of Palestine to oblivion, but they failed to achieve either of those goals, the Iranian president said.

Most global leaders snubbed the Warsaw meeting which was held on February 13-14. The US had initially said the forum would focus on the “important element of making sure that Iran is not a destabilizing influence.”

Later, as officials from various countries indicated their refusal to participate, Washington claimed that the summit was “not a venue to demonize or attack Iran,” in an apparent about-face