STEP5 concluded in Karachi after 3 days of scientific discussions

TEHRAN, Mar 02 -Around 70 scientists took part at the 5th round of Science and Technology Exchange Program (STEP) in Islamic countries at the International Center for Chemical and Biological Sciences (ICCBS) of the University of Karachi, Pakistan, and presented the latest findings in the field of health science. 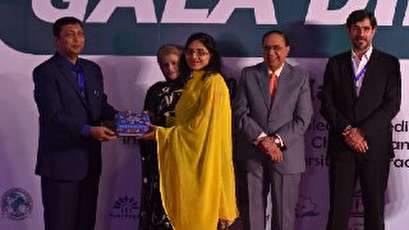 TEHRAN, Young Journalists Club (YJC) -The STEP5 was held with the close collaboration of the Mustafa (pbuh) Science and Technology Foundation (MSTF) and the University of Karachi from 28th of February to 2nd of March.

International scientists from around the world gathered and discussed solutions to overcome the battle on diagnosis strategies of the communicable and non-communicable diseases (ie. NCDs and CDs) emphasizing on female scientists' contribution in future global village.

Moreover, there was a chance for attendees to get to know the industries and commercialization possibilities of health cutting-edge scientific products in the Islamic countries.

During the 3rd day of the meetings, outstanding scientists of the Islamic world met to write down the statement of STEP5 which comes as follows;

In The Name of Allah

The Merciful and The Beneficent

Statement of STEP 5: Cutting Edge Pharmaceutical Approaches to Meet Health Challenges of CDs and NCDs; with an emphasis on female scientists’ contributions"

The program included the following sections:

a-       Influential Actions to Overcome Health-Related Challenges lying in the Islamic World;

b-      Latest development to Overcome Challenges Arising from CDs and NCDs in the Islamic World;

c-       STI and Future of Communicable and Non-Communicable Diseases in the Islamic World;

-        Workshops: 75 scholars participate in the 3 workshops that was conducted by the Science Beam Co. and included following:

Based on extensive discussions during these sessions and presentations by delegates on the state of R&D in their respective institutions, the following observations and recommendations were made to MSTF to further enhance S&T collaboration between Islamic countries and beyond:

1-      To encourage women scientists to be involved in leadership as a model for others;

2-      To create a free and enabling environment to foster freedom of idea, critical thinking, sharing and mentoring;

3-      To enhance women’s contribution to scientific bodies and events;

4-      To establish STI virtual hub to facilitate the communication and networking;

5-      To establish university and other research centers network;

7-      To map, identify gap and fill a niche to develop MSTF strategic plan;

11-    To encourage and support alliances and capacity building in priority areas;

12-    To promote herbal medicine and natural product and indigenous knowledge;

13-    To identify champion women scientists as the role model;

14-    To increase public awareness on the activities and mission of MSTF;

15-    To prioritize scientists working in Muslim countries to be awarded or to setup extra awards to those scientists;

17-    To create innovation and entrepreneurship network;

The pilot of MSTF Lab Network which was proposed to be established in the 4th STEP Statement, was presented by MSTF and welcomed by the attendees of the 5th STEP.

The attendees of the meeting deeply value and appreciate the excellent organization of the program and the overwhelming hospitality of PCMD and the officers of ICCBS, University of Karachi and in particular the dedication and commitment of leadership and staff of ICCBS and University of Karachi.

We acknowledge the vision of MSTF for furthering the S&T agenda among the Islamic World.