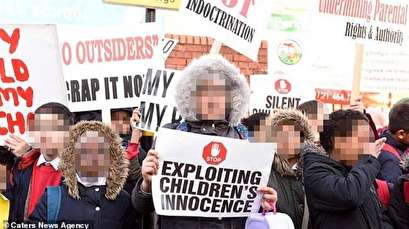 The mass exodus has drained the school of 80 percent of its students.

The parents said the school was “brainwashing” their kids about gay rights through the “No Outsiders” program, the paper wrote.

The Alum Community Rock Forum, which gathers members of the local community in Birmingham’s Alum Rock suburb, protested that the school was “undermining parental rights and aggressively promoting homosexuality.”

“Dialog, petitioning, and protests by parents have been repeated and arrogantly ignored,” the forum said, adding, “Our children, our choice - work with parents not against them.”

The school was the first place in the country where the program was launched in 2014 to teach children about the Equality Act. The act also covers such areas as age, disability, marriage, pregnancy or maternity, race, and religion or belief.

Mariam Ahmed, whose four-year-old daughter attends the school, organized a petition against the project.

She said, “What they are teaching is not right, they are too young. There are nine parts of the Act and they only seem to be focusing on one, homosexuality, and that is wrong. They need to have an ethos which reflects the area.”

Muslims across the UK have, time and again, risen in protest against measures infringing on their religious and ideological freedoms.

Late last year, the Muslim Council of Britain said it was campaigning along other groups to persuade Prime Minister Theresa May, who lead the ruling Conservative Party, as well as leader of the opposition Labour Party Jeremy Corbyn, to adopt a working definition of Islamophobia.

Hate attacks against Muslims have also been on rise since a series of terror attacks by Daesh sympathizers across the UK in 2017. Islamic communities in the UK have always condemned such acts of terror.

Campaigners believe a general trend in politics to pander with far-right groups to grab the vote of their supporters have also been to blame for surge in anti-Muslim hate behavior.