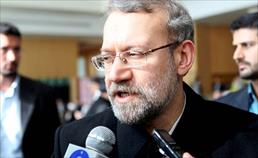 Speaking in a press conference prior to departure, Larijani said "The Islamic Republic of Iran has always kept a special regard for African countries in terms of economical and political relations.”

He held that the two countries of South Africa and Congo are friends with Iran and conduct a lot of parliamentary cooperation with the country.

He added "There’s been much consultation between Iran and South Africa after the Iranian revolution and there has been cooperation in other sections, especially the economic.”

The Speaker of the Majlis pointed out "A parliamentary delegation from Iran recently visited South Africa, doing the preliminary talks. We hope that on this trip there will be more talk on more and more cooperation especially on similar laws; as well as strengthening economic relations, for which grounds are laid these days.”