Grandma floats away on ice throne during photoshoot

TEHRAN, Mar 04 -A Texas grandma who sat on a throne-shaped piece of ice in Iceland ended up needing to be rescued when it floated away with her on top. 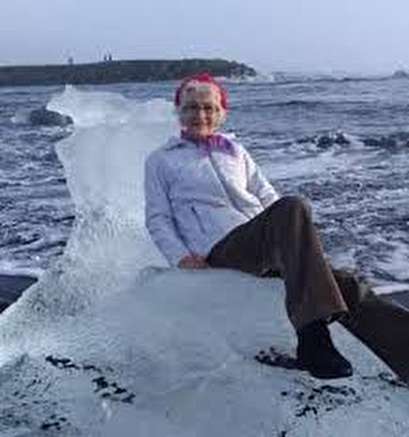 TEHRAN, Young Journalists Club (YJC) -Judith Streng said she was traveling in Iceland with her son, Rod Streng, when they spotted some people taking photos on the iceberg throne at Diamond Beach in Jorkulsarlon.

"It was shaped like an easy place to sit. You can tell by looking at the shape of it, and I thought well it looks like fun," Judith Streng told ABC News.

"When I got on it, it started to totter and a wave was coming in," Streng said. "A very large wave came in and kind of made the throne kind of rock, and I could tell that I was slipping off."

Streng said she had thought the piece of ice was sturdy because other tourists had just been climbing on it.

The ice chunk floated away with Streng still on top, but the woman was soon rescued by Randy Lacount, a Florida man who was boating nearby.

Photos of Streng's unusual ordeal went viral after being tweeted by her granddaughter, Catherine Streng, who received them in text messages from her dad.

Streng said she has no regrets about the incident.

"I thought it [would] be quite fun. You know I always wanted to be queen. I mean, come on, that was my chance," she said.