TEHRAN, Mar 05 - Iraqi President Barham Salih highlighted the importance of an upcoming visit to the Arab country by his Iranian counterpart, Hassan Rouhani, and said Baghdad insists that close relations between the two neighboring countries are in the interest of both nations. 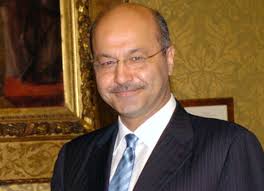 TEHRAN, Young Journalists Club (YJC) - “Of course, President Rouhani’s trip to Baghdad will be an important one,” Salih said in an interview with a local Arabic-language media outlet.

Asked about Iraq’s position on dialogue between Iran and Saudi Arabia, he said, “I made a visit to Tehran, during which I had deep discussions with Iranian leaders, and many of these cases were dealt with.”

It is in Baghdad’s interest to continues the relationship with Tehran and make it a basis for its regional relations, he went on to say.

Heading a high-ranking delegation, the Iranian president will visit the Arab country at the official invitation of Baghdad on March 11.

It will be Rouhani’s first official visit to Iraq during his tenure.

The Iranian president’s visit would come against the backdrop of Tehran’s efforts to boost its foreign trade in the US sanctions era.

Iraq’s foreign minister said recently that his country is “not obliged” to abide by sanctions imposed by the US against Iran and would be pursuing options to continue bilateral trade.

Salih paid a visit to Tehran in November 2018 with a ranking delegation for a series of political and economic talks.