TEHRAN, Mar 05 - India has played down US President Donald Trump's decision to end special trade agreements, saying it only affected a small portion of India's total exports to America. 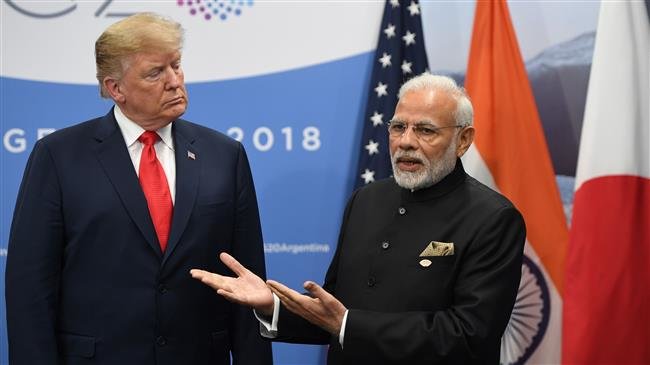 TEHRAN, Young Journalists Club (YJC) - In a move that was largely viewed as an extension of his protectionist policies aimed at cutting trade deficit with other countries, Trump told congressional leaders on Monday that he wanted to end India's preferential trade treatment under a program that allows New Delhi export $5.6 billion worth of goods to the US duty free.

"I am providing notice of my intent to terminate the designation of India as a beneficiary developing country under the Generalized System of Preferences (GSP) program," Trump said.

"I am taking this step because, after intensive engagement between the United States and the Government of India, I have determined that India has not assured the United States that it will provide equitable and reasonable access to the markets of India," he added.

The GSP program granted favorable treatment of imports from both countries for a range of manufactured goods, such as automotive parts, tires and appliance parts.

Hours after Trump’s announcement, New Delhi reacted by saying that the move will not have a "significant impact" on its exports as it concerned a small chunk of India's $80 billion in annual exports to the US.

The "actual benefit" which will be impacted would be to the tune of $190 million, which Wadhawan said was moderate compared to the total volume of trade.

He said the reason trade negotiations with the US did not end favorably was because Washington had "extra demands" which New Delhi could not cater to.

“India felt it had arrived at a fairly meaningful offer balancing US aspirations with our concerns, which was not workable with the US side. This is a given situation now. So it seems like we're looking at a non-GSP trade with the US," Indian Commerce Secretary Anup Wadhawan said, according to NDTV.

The Office of US Trade Representative Robert Lighthizer said in a statement that Turkey was also getting the same treatment because it no longer complied with “the statutory eligibility criteria.”

“Turkey is no longer eligible to participate in the Generalized System of Preferences program because it "is sufficiently economically developed," the statement read.

Trump has repeatedly vowed to reduce US trade deficits with other countries, calling out India, China and a number of European countries for their high tariffs.

On Saturday, he described India as a "very high tariff nation" and said he wanted to charge "a reciprocal tax" to match New Delhi’s heavy duties on US imports.

"India is a very high tariff nation. When we send a motorcycle to India, they charge 100 per cent tariff. When India sends a motorcycle to us, we charge nothing. I want a reciprocal tax, at least I want to charge a tax," he said at the Conservative Political Action Conference.

According to the US Trade Representative's Office, America’s goods and services trade deficit with India stood at around $27.3 billion in 2017.

India is the biggest beneficiary of the GSP and Trump’s decision amounts to the strongest punitive action by Washington against New Delhi under his presidency.

"I will continue to assess whether the Government of India is providing equitable and reasonable access to its markets, in accordance with the GSP eligibility criteria," the businessman-turned-president said in his letter.