Flash floods, snow and rain kill at least 59 in Afghanistan

TEHRAN, Mar 06 - Flash floods, heavy rains and snowfall have killed at least 59 people across Afghanistan during the past two weeks and left thousands homeless, with the southern provinces of Helmand and Kandahar the worst-hit, an Afghan official said on Wednesday. 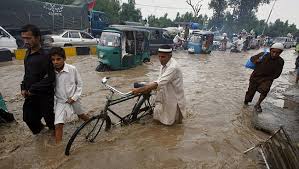 TEHRAN, Young Journalists Club (YJC) - Some 5,000 people were displaced in Kandahar alone, the Afghanistan National Disaster Management Authority (ANDMA) said, though a U.N. relief agency reckoned at least 15,300 people in the province had been affected by the calamitous weather.

Hashmat Khan Bahaduri, spokesman for ANDMA, said the damage and casualty estimates could rise as some provinces had still to conduct assessments.

"We have reports that 59 were killed 143 people were injured and many are still missing," Bahaduri said.

The floods had left many people desperate for shelter, food and clothing, the U.N. Office for the Coordination of Humanitarian Affairs (OCHA) said in a statement late on Tuesday.

The heavy rains could benefit farmers at least, as many were unable to plant crops last year due to a severe drought.