Trump barreling toward war with Iran, Congress must stop him: US Senators

TEHRAN, Mar 06 -Two US senators warn that the administration of President Donald Trump “is barreling toward war with Iran,” calling on Congress to act to prevent it. 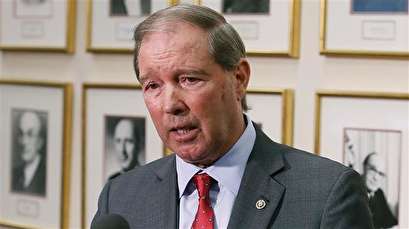 TEHRAN, Young Journalists Club (YJC) -Writing for The Washington Post in an article published on Tuesday, Tom Udall (D-NM) and Richard J. Durbin (D-Ill.) said that Trump might wage a war on Iran based on a wrong justification like the one the administration of former President George W. Bush used to go to war with Iraq in 2003.

They said the Trump administration claims that Iran has not abided by the nuclear deal it reached with the world powers, an accusation Tehran has vehemently rejected. The International Atomic Energy Agency (IAEA) has several times confirmed that Iran complies with the restrictions on its nuclear activities under the 2015 deal known as the Joint Comprehensive Plan of Action (JCPOA).

They added that the president also accuses Iran of being partially responsible for the rise of the Daesh terrorist group, another allegation that Iran has dismissed as unfounded. Iran has, in fact, been actively providing the governments of Iraq and Syria with military advice to push back against foreign-backed militants who have been terrorizing both countries using support from Western countries and their regional allies.

“Sixteen years after the US invasion of Iraq, we are again barreling toward another unnecessary conflict in the Middle East based on faulty and misleading logic,” the senators wrote.

“The Trump administration’s Iran policy, built on the ashes of the failed Iraq strategy, is pushing us to take military action aimed at regime change in Tehran. We must not repeat the mistakes of the past, and Congress must act urgently to ensure that.”

“Similar to the George W. Bush administration’s justification for the war in Iraq, the Trump administration has presented the false narratives that Iran is not meeting its obligations under the nuclear deal, and that it is somehow partially responsible for the rise of" Daesh in Syria, they added.

The two senators also said Washington is basing its logic to go to war with Iran on accusation that there is a link between Tehran and the terrorist group al-Qaeda, adding, but there is “no hard evidence.”

“The Trump administration has also been attempting to create a strong link between al-Qaeda and Iran — based on vague suggestions, but no hard evidence. There is speculation that administration officials are considering striking Iranian territory or its proxies, using the al-Qaeda narrative to claim legal authority for military action under the 2001 Authorization for Use of Military Force — the same authorization used to launch the Afghanistan war, now in its 18th year.”

“We must heed the lessons of history, and Congress must exercise its constitutional authority to counter the president’s reckless march toward war with Iran,” they wrote, adding, “Congress must make clear to the president that the United States will not enter another conflict in the Middle East without its approval.”

They two senators also said that they were introducing draft legislation to prevent any “unconstitutional attack on Iran."

“We plan to soon reintroduce draft legislation by a bipartisan group of senators that would restrict any funds from being spent on an unconstitutional attack against Iran.”