TEHRAN, Mar 07 -In Canada, wolves are pushing woodland caribou populations toward extinction. But, according to a new study, disrupting the movements of wolves could help protect vulnerable caribou. 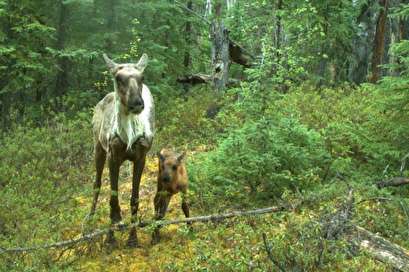 TEHRAN, Young Journalists Club (YJC) -Researchers hypothesize the balance between predator and prey was upset by human incursions on the landscape, specifically the construction of linear features, such as pipelines and roads. Infrastructure related to oil, gas and forestry development provided wolves new access to woodland caribou in the Canadian Oil Sands.

To protect caribou, wildlife officials have built fenced enclosures and instituted wolf culling programs. But the latest findings, published this week in the Journal of Animal Ecology, suggest efforts to disrupt the movements of wolf packs could protect caribou more effectively.

Researchers used camera traps to study the habitat use patterns of wolves and caribou. After analyzing some 500,000 photographs, scientists determined barriers to disrupt wolves' access to and use of linear features could better protect caribou than fences and culls.

According to the new paper, the movement of wolves along linear features could be disrupted by spreading logs, felling trees or roughing up the soil.

"Mitigation strategies that resist, or redirect, animal travel on linear developments can reduce the effects of resource development on interacting human and predator-prey interactions," researchers wrote.

Authors of the new study also recommend moving snowmobiling paths away from vulnerable caribou populations. Like oil and gas infrastructure, recreational incursions can provide easier access to caribou for hungry and opportunistic wolves.

Restoration of caribou habitat is the most ideal solution to restoring predator-prey balance and ecological health, but wildlife restoration takes time and effort.

"Disrupting the ability of animals to travel on linear developments is different than recovering the habitat," researchers wrote in a news release. "It takes decades for the habitat to recover in these northern caribou ranges and the cost of reclamation is considered prohibitive. However, disrupting travel on these same features can be more easily implemented, scaled-up across ranges, and reduce the predator's ability to encounter caribou immediately."