TEHRAN, Mar 07 -Every time LHC and ATLAS conduct particle collision experiments in 2021 and 2023, the FASER instrument will be collecting data that could reveal the presence of "dark photons." 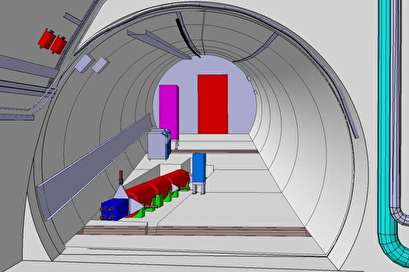 "It is very exciting to have FASER approved for installation at CERN," Jamie Boyd, a spokesperson for the FASER experiment, said in an update. "It is amazing how the collaboration has come together so quickly and we are looking forward to recording our first data when the LHC starts up again in 2021."

For the experiment, scientists will assemble and install a new instrument inside the Large Hadron Collider at CERN, the European Council for Nuclear Research. It is the largest and most powerful particle collider in the world.

The project was initiated by a team of physicists at the University of California, Irvine.

"Seven years ago, scientists discovered the Higgs boson at the Large Hadron Collider, completing one chapter in our search for the fundamental building blocks of the universe, but now we are looking for new particles," Jonathan Feng, UCI professor of physics and astronomy, said in a news release. "The dark matter problem shows that we don't know what most of the universe is made of, so we're sure new particles are out there."

Feng and his colleagues at UCI will collaborate with scientists from Europe, China and Japan, as well with physicists from other universities in the United States. In total, the new dark matter experiment will involve the efforts of 30 to 40 researchers.

The FASER instrument is a small device that will be placed near the collider's massive underground tunnel, a 16-mile loop. The device will be positioned near the ATLAS instrument, which produces subatomic particles as protons pass through.

Scientists hope that the ATLAS instrument will create new exotic particles that can be measured by the FASER instrument as they decay.

"One of the advantages of our design is that we've been able to borrow many of the components of FASER -- silicon detectors, calorimeters and electronics -- from the ATLAS and LHCb collaborations," Boyd said. "That's allowing us to assemble an instrument that costs almost hundreds of times less than the largest experiments at the LHC."

Every time LHC and ATLAS conduct particle collision experiments in 2021 and 2023, the FASER instrument will be collecting data that could reveal the presence of "dark photons," particles associated with dark matter, neutralinos and other exotic particles.

The FASER instrument will be one of eight instruments currently looking for undiscovered particles in the collider. In effort to find exotic particles associated with dark matter, CERN has worked to incorporate new technologies as part of the Physics Beyond Collider study.

"This novel experiment helps diversify the physics program of colliders such as the LHC, and allows us to address unanswered questions in particle physics from a different perspective," said Mike Lamont, co-coordinator of the PBC study group.

The collider's main detectors aren't designed to identify light and weakly interacting particles. Exotic particles produced by ATLAS could go undetected, traveling through the tunnel for hundred of feet, parallel to the main beam line, before turning back into more common particles.