TEHRAN, Mar 07 - The Syrian government says it "categorically rejects" a report by the global chemical weapons watchdog that banned weapons were used in a Damascus suburb last year, accusing the West of fabricating lies through its mercenaries in the Arab country. 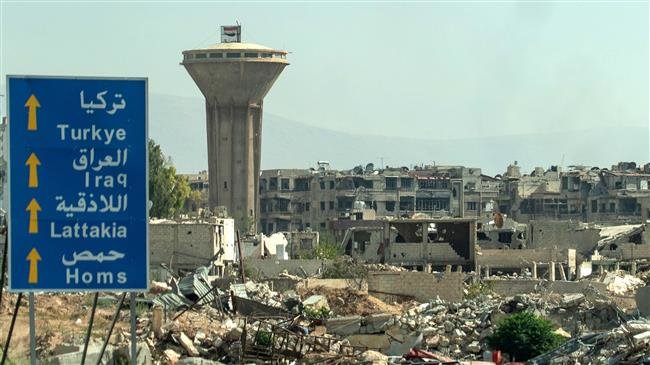 TEHRAN, Young Journalists Club (YJC) -The Organization for the Prohibition of Chemical Weapons (OPCW) announced on March 1 that based on the findings of its inspectors, a “toxic chemical” containing chlorine was used in clashes between the Syrian military and anti-government militants in the town of Douma, near the capital Damascus on April 7, 2018.

"The Syrian Arab Republic categorically rejects the conclusions of the mission team," the Syrian Foreign Ministry said in a statement carried by state news agency SANA. "(The report) was no different to previous reports from the mission, which were full of blatant distortion of facts."

The statement criticized the OPCW for ignoring eyewitness accounts that terrorist groups had staged the chemical attack scenario with the help of the so-called White Helmets aid group, which has known ties to Britain.

“In fact what attracts attention now is that the authors of the report ignored the statements of witnesses who lived with that incident and described the allegations of using chemical weapons in Douma as a play performed by armed terrorist organizations,” it added.

The statement blasted the US, the UK and France for using the alleged attack as a pretext to conduct aerial and missile raids in Syria “that destroyed scientific centers which include laboratories for peaceful purposes.”

The ministry said Syria provided the OPCW mission with all the necessary facilities hoping that it would make a logical and professional conclusion with giving in to political pressure from Western countries.

“Syria calls on the member countries at the OPCW to uncover such fake reports which don’t enjoy any credibility, and calls upon the technical secretariat of the OPCW to appoint fact-finding mission members who are professional, fair and neutral,” the spokesman said.

At the time Douma was held by rebels but besieged by pro-government forces. It came back under government control later that month after years of siege.

The OPCW investigation did not assign blame and confirmed that it had found no traces of banned chemicals but said the information gathered offered "reasonable grounds that the use of a toxic chemical as a weapon has taken place on 7 April 2018."

"This toxic chemical contained reactive chlorine," the Hague-based organization said, noting that it had found no evidence of the use of nerve agents in the Syrian town.

A joint UN-OPCW team appointed to assign blame for alleged chemical attacks in Syria found that Daesh terrorists had used sulfur mustard in their attacks from 2015 to 2017.