TEHRAN, Mar 07 - A US-based human rights group has revealed that British and American have killed and maimed nearly 1,000 civilians, including over 120 children, in the Saudi war in Yemen, a new report has revealed. 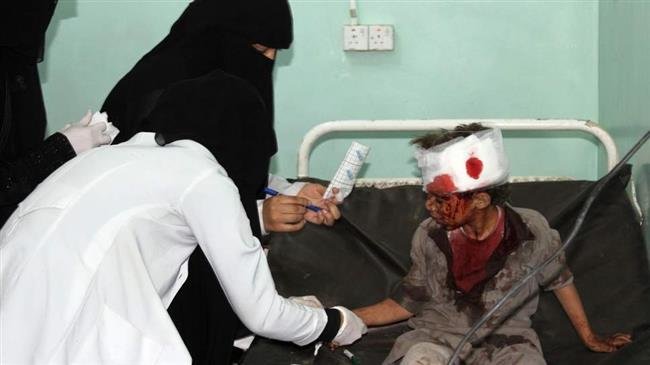 TEHRAN, Young Journalists Club (YJC) - According to the report released on Wednesday by the US-based University Network for Human Rights (UNHR), the airstrikes killed 203 people and injured at least 749. At least 122 children and 56 women were also among the casualties.

The investigators from the UNHR and Yemeni monitoring group Mwatana said they obtained the figures from only 27 unlawful strikes launched in Yemen between April 2015 and April 2018.

The findings from the 128-page investigation have reignited the debate on the need for the US and Britain to halt arms sales to Saudi Arabia and its allies.

“Our findings reinforce prior evidence demonstrating that the Saudi/UAE-led Coalition is failing to fulfill its obligations under the laws of war and repeatedly using US weapons in apparently disproportionate and indiscriminate attacks that have resulted in widespread civilian casualties and other civilian harm in Yemen,” the report said.

The report stated that the air strikes could be unlawful under international law and constitute potential war crimes.

“Many of the attacks appeared to take place far from any potential military target,” the report said. “Others caused harm to civilians that vastly outweighed any likely military benefit. In no case did it appear that coalition forces took adequate precautions to minimize harm to civilians, as required by international humanitarian law.”

Meanwhile, the Pentagon said in a statement on Wednesday the United States does not investigate airstrikes by the Saudi-led coalition, but “we have consistently discussed and reinforced procedures to limit civilian casualties.”

“We have repeatedly urged the Saudi-led coalition to address shortcomings in their operations that have led to civilian casualties, and have worked with them to develop procedures and oversight mechanisms to reduce such incidents,” said Pentagon spokeswoman Cmdr. Rebecca Rebarich.

Saudi Arabia and a number of its allies have been waging a war on Yemen for the past five years to restore the former regime, which resigned and fled the country amid popular discontent.

The World Health Organization says some 10,000 people have been killed since the coalition launched the war, but rights groups put the death toll at five times higher.

The Saudi-led invaders have also blockaded Yemen, causing widespread famine. On Tuesday, UN Secretary-General Antonio Guterres said tens of thousands of children under the age of five had died of starvation ever since the warfare started.