TEHRAN, Mar 09 - The people of North Korea blame the United States for the collapse of the recent summit between US President Donald Trump and North Korean leader Kim Jong-un in the Vietnamese capital of Hanoi, state media say, amid reports that Pyongyang is getting prepared to resume its ballistic missile tests. 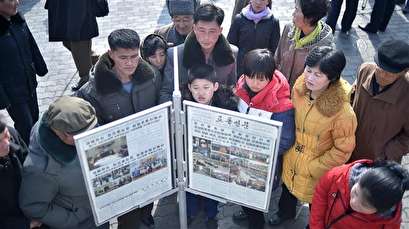 TEHRAN, Young Journalists Club (YJC) -The Rodong Sinmun, the newspaper of the North’s ruling Workers’ Party, admitted for the first time on Friday that the summit between the two leaders on the denuclearization of the Korean Peninsula and the dismantling of Pyongyang's missile program in exchange for removal of all harsh US sanctions against the country had failed to yield intended results.

“The public at home and abroad that had hoped for success and good results from the second DPRK-US summit in Hanoi are feeling regretful, blaming the U.S. for the summit that ended without an agreement,” the paper said in a commentary, referring to North Korea's official name – the Democratic People's Republic of Korea.

Trump and Kim met at a historic summit for the first time in June 2018 in Singapore, where they agreed to work toward denuclearization of the Korean Peninsula. Subsequent diplomacy between the two sides, however, made little progress, mainly because the US refused to lift its crippling sanctions.

Pyongyang has so far taken several steps toward the goal by suspending missile and nuclear testing, demolishing at least one nuclear test site, and agreeing to allow international inspectors into a missile engine test facility.

The US, however, has insisted that sanctions on the North must remain in place until it completely and irreversibly dismantles its nuclear program.

The second summit between the two sides was held in Hanoi on February 28 and 29 but Trump abruptly walked away from the talks and told a press conference shortly afterward that Kim was not ready to make the necessary concessions.

During the presser, a downbeat Trump told reporters that “he had to walk away” from the talks because of North Korea's demands to lift all economic sanctions against Pyongyang as a prerequisite to denuclearization.

However, a few hours later, North Korean Foreign Minister Ri Yong-ho offered a completely different breakdown of the summit, telling reporters in a separate presser that Pyongyang never asked for the removal of all sanctions, but only the partial removal of them.

The US administration officials later said they were hopeful about sending a delegation to North Korea in the coming weeks to resume negotiations on the North’s nuclear weapons program.

'I would be very disappointed if I saw testing'

The prospect of an agreement between Washington and Pyongyang seems to have lost steam after South Korea alleged this week that the North was restoring a ballistic missile launch facility it had torn down as an initial step towards denuclearization.

The site, located in North Pyongan Province, was claimed to be serving as the engine test site and missile launch facility for liquid-fueled intercontinental ballistic missiles (ICBMs).

Last year, Pyongyang announced that the site, which is known by at least two other names, Tongchang-ri and Sohae, had been fully destructed.

In response to Seoul’s report, Trump on Friday reiterated his belief in his good relationship with the North Korean leader but said he would be “disappointed” if Pyongyang were to resume weapons testing.

“I would be surprised in a negative way if he did anything that was not per our understanding. But we’ll see what happens,” the US president told reporters. “I would be very disappointed if I saw testing.”

Trump went as far late last year as saying that he “fell in love” with Kim but the North Korean leader had failed to bridge the wide gap between the two sides.

White House National Security Adviser John Bolton, who had previously called for a tough approach to North Korea, played down the development of the testing site by the North and said it was too soon to make a determination on the reports of the North Korean activity.

“We’re going to study the situation carefully. As the president said, it would be very, very disappointing if they were taking this direction," Bolton told Fox News.

“The president’s obviously open to talking again. We’ll see when that might be scheduled or how it might work out,” he added.

Additionally, a senior State Department official, who spoke on condition of anonymity, said Washington was keen to resume talks as soon as possible but North Korea’s negotiators needed to be given more latitude.

“There will necessarily need to be a period of reflection here. Both sides are going to have to digest the outcome to the summit,” the official said.

“Fundamentally, where we really need to see the progress, and we need to see it soon, is on meaningful and verifiable steps on denuclearization. That’s our goal and that’s how we see these negotiations picking up momentum,” the official added.

The collapse of the summit has also disappointed US-ally South Korea, which has been improving relations with the North since Kim and South Korea’s President Moon Jae-in met in January 2018.