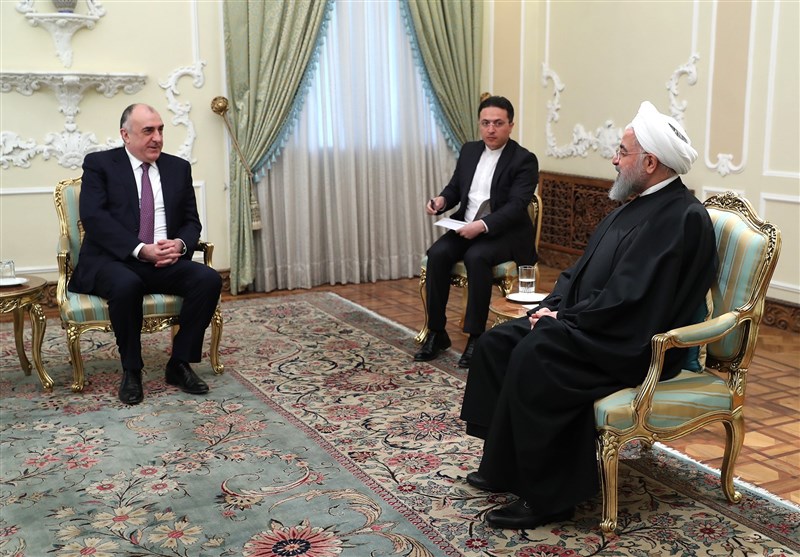 TEHRAN, Young Journalists Club (YJC) - In a Saturday meeting with Foreign Minister of the Republic of Azerbaijan Elmar Mammadyarov in Tehran, Rouhani called for efforts to strengthen mutual cooperation among Iran, Azerbaijan and Russia, saying, “There are various projects in the region that we can carry out trilaterally and multilaterally.”

He also pointed to the opportunities for cooperation between Tehran and Baku in the energy industry and construction of dams and power plants.

The president further noted that extension of a new railroad line that connects the Iranian cities of Qazvin and Rasht would allow rail access to the border city of Astara, expressing hope that immediate implementation of the major project would serve the interests of the two Muslim neighbors.

For his part, the visiting Azeri minister hailed the “brotherly and growing” ties between Tehran and Baku, saying there are no obstacles to the enhancement of political, economic, cultural and social relations with Iran.

Mammadyarov also said that connection of the Iranian railroad to Astara would mark the completion of a strategic regional project that would link Iran, Azerbaijan and Russia and allow Iran to have access to the Black Sea via Georgia.

He further conveyed an official invitation from Azeri President Ilham Aliyev to Rouhani to attend the next Non-Aligned Movement (NAM) conference in Baku.

Rouhani on Wednesday inaugurated the railroad line connecting the city of Qazvin to the provincial capital of Rasht in northern Iran.

The new track is a major section of a railroad line dubbed the ‘Green Corridor’, which connects the Caspian Sea to the Persian Gulf.

The railroad line, stretching 164 kilometers, will be also extended to the port city of Anzali and further to the city of Astara in Iran and a border city with the same name in the Republic of Azerbaijan.

Iran has accelerated efforts in recent years to complete the sections of the international North-South Transport Corridor (NSTC) that pass through its territory.

The NSTC concept was formalized by India, Iran and Russia in 2000.