Trump: I won’t sign a trade agreement with China unless it’s a ‘great deal’

TEHRAN, Mar 09 - US President Donald Trump says he remains optimistic about reaching an agreement to resolve the months-long US-China trade war but will not sign a trade deal with Beijing unless it is a "very good deal." 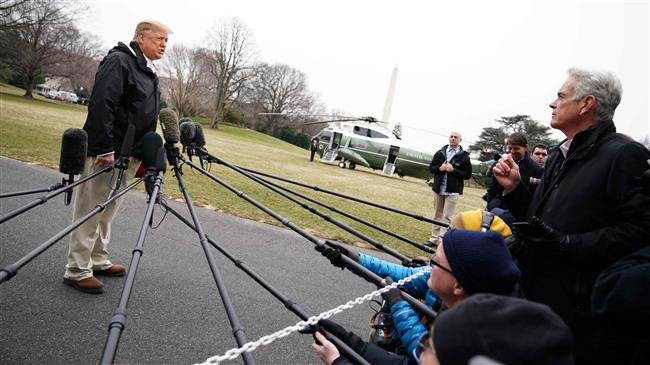 TEHRAN, Young Journalists Club (YJC) -Trump made the comments Friday while talking to reporters outside the White House.

"I am confident but... if this isn't a great deal, I won't make a deal," Trump said. Then he added: "We will do very well either way, with or without a deal."

The United States and China have been battling over trade tariffs since last year. The trade dispute has started to affect China's economic growth.

China's exports and imports fell significantly more than expected in the month of February, data published Friday by the country's customs administration showed.

China's February exports plummeted 20.7 percent from the same period a year prior, and imports dropped 5.2 percent from a year earlier, considerably more than expected.

There have been conflicting comments out of Washington and Beijing about the likelihood of achieving a trade deal. A US diplomat in Beijing said Friday that an agreement was not imminent.

The Trump administration is demanding China to make deep structural changes, including changes to how Beijing treats US companies and its own state-owned enterprises, and the deal is expected to require commitments on the Chinese currency and protections for American technology.

But "you saw them walk away from North Korea and just saying that... it could apply to trade," he said, referring to Trump's recent summit in Hanoi with the North Korean leader Kim Jong Un, which ended early and without an agreement.

He claimed that Trump's tough negotiating strategy and "aggressive tariffs" brought Beijing to the negotiating table.

The Republican president has said that if trade negotiators make enough progress, he would meet with Chinese President Xi Jinping in Florida to decide on the most important terms of a trade deal.

But Terry Branstad, the US ambassador to China, told The Wall Street Journal in an interview Friday that preparations for a Trump-Xi meeting are not yet under way.

"Both sides agree that there has to be significant progress, meaning a feeling that they're very close, before that happens,” he told the newspaper. "We're not there yet."

Lighthizer, one of the administration’s most ardent hard-liners on China, believes that China needs to make substantive and structural changes to its trade policies, as opposed to only minor changes it has offered in the past.