TEHRAN, Mar 09 - Democratic Senator Elizabeth Warren vowed on Friday to break up Amazon, Google and Facebook if elected US president to promote competition in the technology sector. 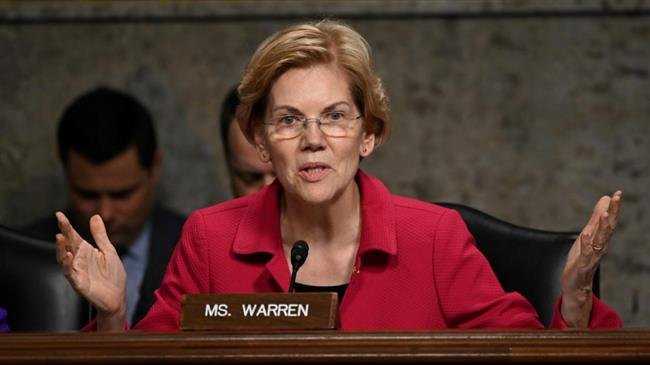 TEHRAN, Young Journalists Club (YJC) -Seeking to stand out in a crowded field vying to be the Democratic candidate for president in 2020, Warren said at a campaign event in Queens that it was time to challenge the increasing dominance of America’s biggest technology companies.

Amazon abruptly scrapped plans in February to build a major outpost in the neighborhood that could have created 25,000 jobs, blaming opposition from local leaders.

In an event held not far from the proposed Amazon site, Warren said that big tech companies come into towns, cities and states and “bully everyone into doing what they want” and “roll right over” small businesses and startups that are a threat.

“Giants are not allowed to buy out the competition. The competition needs the opportunity to thrive and grow,” she said.

Some of those in attendance said they didn’t know enough about Warren’s proposal to back it fully but they trusted her policy expertise.

“What I like is that she’s proposing big ideas. I think that’s important,” said lawyer Kate Aufses, 32, who said she was undecided about which Democratic candidate she would support.

Earlier in the day, Warren said in a post medium.com/@teamwarren/heres-how-we-can-break-up-big-tech-9ad9e0da324c on Medium that she would nominate regulators to unwind acquisitions such as Facebook's deals for WhatsApp and Instagram, Amazon's deals for Whole Foods and Zappos, and Google's purchases of Waze, Nest and DoubleClick.

Warren also proposed legislation that would require tech companies like Google and Amazon that offer an online marketplace or exchange to refrain from competing on their own platform. This would, for example, forbid Amazon from selling on its Amazon Marketplace platform.

It is rare for the government to seek to undo a consummated deal. The most famous case in recent memory is the government’s effort to break up Microsoft. The Justice Department won a preliminary victory in 2000 but was reversed on appeal. The case settled with Microsoft intact.

US Congress held a series of hearings last year looking at the dominance of major tech companies and their role in displacing or swallowing up existing businesses, among other things.

Amazon’s business model has displaced brick-and-mortar stores and the company has been criticized for poorly paying its warehouse workers.

Facebook has angered lawmakers for losing track of users’ data and for not doing more to stop foreign meddling in the 2016 US presidential election.

Google has clashed with smaller companies, like Yelp, over search placements and has raised concerns it would comply with China’s internet censorship and surveillance policies if it re-enters the Asian nation’s search engine market.

NetChoice, an e-commerce trade group whose members include Facebook and Google, said Warren’s plan would lead to higher prices.

“Senator Warren is wrong in her assertion that tech markets lack competition. Never before have consumers and workers had more access to goods, services and opportunities online,” said Carl Szabo, vice president and general counsel for NetChoice.

In Washington, the president of the US Chamber of Commerce, Tom Donohue, said breaking up the big tech companies would “take us back to the Stone Age.”

“This is not a vision for the future, but an archaic idea that should be dumped in your computer trash can,” he said.

Public Knowledge, a tech policy group, called Warren’s plan a step toward protecting the next generation of businesses, but stopped short of full-throated support for breaking up the tech giants.

Tim Wu, a professor of law, science and technology at Columbia Law School who coined the term “net neutrality” and has warned against an economy dominated by a few giant firms, said in a tweet that it was “heartening” to see the idea of breaking up the tech giants gaining some traction.

Tech companies are some of the biggest political donors. Google spent $21 million to lobby in 2018 while Amazon spent $14.2 million and Facebook spent $12.62 million, according to their filings to US Congress.

Angering a deep-pocketed industry could hurt Democrats, but that is not likely to be a big concern for Warren, who made her political mark and plenty of enemies by going after big banks after the 2007-09 financial crisis. In the Senate, Warren continues to be an outspoken critic of Wall Street and is a leader of her party’s progressive wing.

Other Democratic candidates have also weighed in on the issue.

Senator Bernie Sanders in 2018 even named a bill after Amazon founder Jeff Bezos, the Stop BEZOS Act, which would tax big companies if their employees receive public benefits.