TEHRAN, Mar 10 - Millions of galaxies across the universe are colliding right now. Two of them can be seen in a new Hubble image. 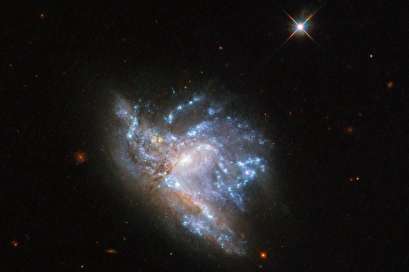 TEHRAN, Young Journalists Club (YJC) -Unlike a car crash, asteroid strike or planetary smashup, all of which happen quickly, galactic collisions play out over millions of years. The drawn-out nature of the drama offers astronomers and their telescopes -- on the ground and in space -- plenty of time to document the cosmic phenomena.

Many galactic collisions are named as a single entity. Astronomers named the duo in the new Hubble image NGC 6052.

When William Herschel first spotted NGC 6052 in 1784, he and his fellow astronomers classified the object as a single irregular galaxy. Scientists now know NGC 6052 is not one oddly shaped galaxy, but two galaxies -- each warped by the gravity and momentum of the other.

"A long time ago gravity drew the two galaxies together into the chaotic state we now observe," according to a news release from the European Space Agency. "Stars from within both of the original galaxies now follow new trajectories caused by the new gravitational effects."

The two galaxies that make up the oddly shaped entity are named NGC 6052A and NGC 6052B. The outlines of each individual galaxy is no longer obvious, which suggests the two are in the late stages of merging.

The Hubble Space Telescope, managed by NASA and ESA, captured the image of NGC 6052 using its Wide Field Camera 3.