TEHRAN, Mar 11 -Negotiations are stalled between the UK and the European Union over the provisions of a deal setting out the terms of bilateral relations following Britain’s upcoming separation from the bloc. 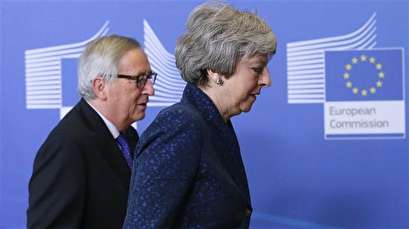 TEHRAN, Young Journalists Club (YJC) -The two sides held "technical" talks in Brussels over the weekend, but a British government source told Reuters that the discussions were “deadlocked,” the agency reported on Monday.

Prime Minister Theresa May’s Conservative government has devised the deal, which was voted down at parliament in January.

The legislature is to vote again on the agreement on Tuesday, but the MPs have ruled out approving it unless the premier secured concessions from the EU.

The country is slated to leave the 28-nation bloc on March 29 as decided by the public during a June 2016 referendum.

Should parliament keep opposing the current Brexit deal or any amended version of it, the country will have to go through the divorce without an agreement.

Already, the referendum and its ensuing drama have cost the country to the tune of billions.

Last month, a senior economist at the Bank of England (BoE) said Britain had lost £40 billion ($51 billion) a year since Britons voted to leave the European Union. Also on Monday, the New Financial independent think tank said gearing up for the departure, more than 275 financial firms were moving a combined £924 billion ($1.2 trillion) in assets and funds and thousands of staff from Britain to the EU.

Some politicians, however, insist that a no-deal Brexit would still ratchet up such costs.

Writing in The Daily Mail, pro-Brexit Environment Secretary Michael Gove said while the prime minister's deal was a compromise, it should not be rejected "for that reason alone."

He appealed for unity among MPs and the country, saying, "We didn't vote to leave without a deal. That wasn't the message of the campaign I helped lead."

If it is rejected, MPs have been promised a vote on Wednesday on whether the UK should leave without a deal. If they then reject a no-deal Brexit, they could get a vote on Thursday on whether to request a delay to Brexit from the EU.