TEHRAN, Mar 12 -A court in Brussels has sentenced a French man who killed four people in a terrorist attack at a museum in the Belgian capital back in 2014 to life in prison. 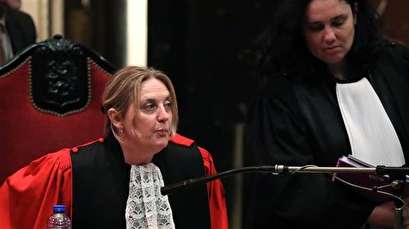 Nemmouche, who spent a year fighting in Syria for the Daesh terrorist group, was found guilty last week of the murder of four people in a gun rampage in Brussels in May 2014.

The court said he had shown no regret for the killings.

On Monday, before jurors retired to consider the sentence, Nemmouche smirked and told the court “life goes on.”

Among the casualties were an Israeli couple, Miriam and Emmanuel Riva. On March 7, Nemmouche claimed the two were agents of Israel’s spy agency Mossad who had been hunted and killed by someone else. He denied involvement in the shooting.

Moreau urged the jury to take a firm stance. “If you say that in Belgium one can be a terrorist without being punished very severely, then we must not be surprised to see people arrive in this country with bombs or assault rifles in their suitcases.”

The court also sentenced Nacer Bendrer, who was found guilty for providing the weapons used in the gun rampage, to 15 years in jail.

Unlike Nemmouche, Bendrer, who is also French, showed signs of regret, saying he was ashamed that he had ever met Nemmouche, describing him as “a monster.”

The pair will both serve their jail terms in France. They have 15 days to appeal the sentence.

Over the past years, Belgium has suffered a series of terrorist attacks, mainly by the recruits of Daesh, a Takfiri terrorist group that is now almost purged from its former bastions in Iraq and Syria.

The Western European country remains on high alert since a Daesh cell based in Brussels carried out massive attacks in Paris in November 2015 and killed 130 people in a matter of a night. The same terror cell was behind attacks in Brussels a year later that killed 32 people.

Many European countries whose nationals traveled to the Middle East to fight for Daesh have been bracing for a comeback of those terrorists still alive, as the Syrian government has defeated the terrorist group.