Thousands of Albanian protesters call for govt to step down

TEHRAN, Mar 16 - Albanian opposition supporters are holding a protest against the government which they accuse of being corrupt and linked to organized crime. 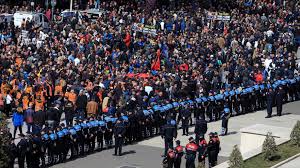 The opposition, whose lawmakers have relinquished their seats in parliament, declines to dialogue with Rama, asking for a transitory Cabinet without him to prepare early elections.

The United States and European Union have warned the opposition against using or inciting violence and to sit down for talks.

Albania hopes to get the EU's approval in June on launching membership negotiations.