Navy to honor Navajo Nation with new class of vessels

TEHRAN, Mar 18 -A new class of Navy ships will be named to honor the Navajo Nation, the Secretary of the Navy announced. 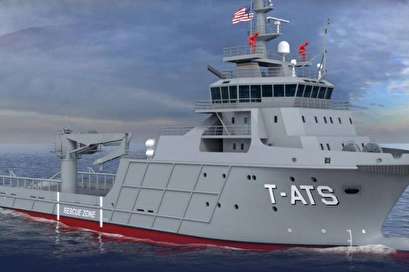 TEHRAN, Young Journalists Club (YJC) -The new class of vessels will be involved in towing, salvage and rescue operations and will replace the current T-ATF 166 and T-ARS 50 class ships in service with the U.S. Military Sealift Command, the U.S. Navy announced this week.

"The Navajo people have fought and served our armed forces with honor and valor in nearly every major conflict since the birth of our nation, so it is fitting and right to name a new class of ship in their honor," said Secretary of the Navy Richard V. Spencer in announcing the honor on Tuesday. "The Navajo class of Towing, Salvage, and Rescue ships will serve our nation and continue the legacy of the Navajo people, and all Native Americans."

Sen. John McCain, R-Ariz., a former Navy captain who died in 2018, was a strong proponent of honoring the Navajo Nation with a Navy vessel.

"John worked hard to ensure the Navajo Nation's contributions to our security and culture were recognized by the U.S. Navy in the manner in which it traditionally pays tribute to important American communities. I'm so pleased, and I know John would be very gratified, that the Navy has now officially named a United States Naval Ship Navajo, a deserved and overdue honor," Cindy McCain, the late Sen. McCain's wife of 38 years, said in statement.

Navajo Nation Council Speaker Seth Damon also praised the decision by the Navy to bring back the Navajo name, which was attached to tug service boats during World War II.

"I extend a strong ahéhee' to the efforts of Secretary Spencer and the late Sen. McCain to advance this effort. Our Navajo people, including several council delegates, have a strong tradition of defense of this land," Damon said in a statement."