TEHRAN, Mar 20 - The head of Kazakhstan’s senate has been sworn in as interim president of the country after long-time leader Nursultan Nazarbayev stepped down in a surprise move. 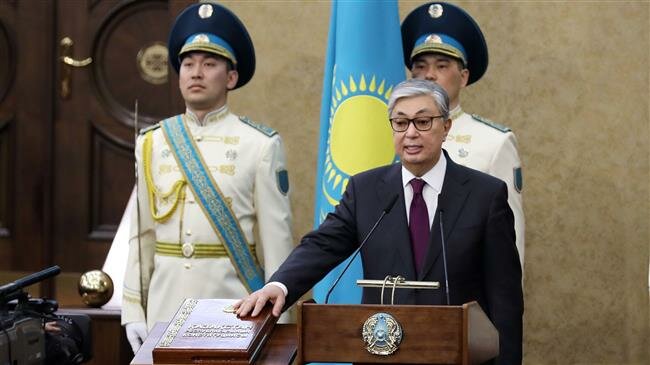 TEHRAN, Young Journalists Club (YJC) - Nazarbayev, 78, announced his resignation in a televised address on Tuesday. Having been Kazakhstan’s president since the country’s independence from the former Soviet Union in 1991, Nazarbayev said he wanted “a new generation of leaders” to assume power and “continue carrying out current reforms in the country.”

In a ceremony also attended by Nazarbayev on Wednesday, Senate Chairman Kassym-Jomart Tokayev took the oath of office as interim president.

He had served twice as the country’s foreign minister.

In his first address in the new role and before the upper and lower houses of the parliament, Tokayev proposed that the capital, Astana, be renamed after Nazarbayev, whom he said had “demonstrated wisdom” in deciding to step down.

“I propose... naming the country’s capital, Astana, in honor of the first president,” said the new leader, suggesting that the new name be “Nursultan.”

He also stressed that Nazarbayev would still be involved in the “adoption of strategic decisions.”

The former president said he would continue to chair the key Security Council and remain leader of the Nur Otan Party, while also retaining his legal title as “leader of the nation.”

Nazarbayev was appointed in 1989 as the first secretary of the Communist Party of the Kazakh SSR — the largest of the Central Asian republics of the former Soviet Union. After the breakup of the Union in 1991, he was elected the independent nation’s first president and won consecutive terms.